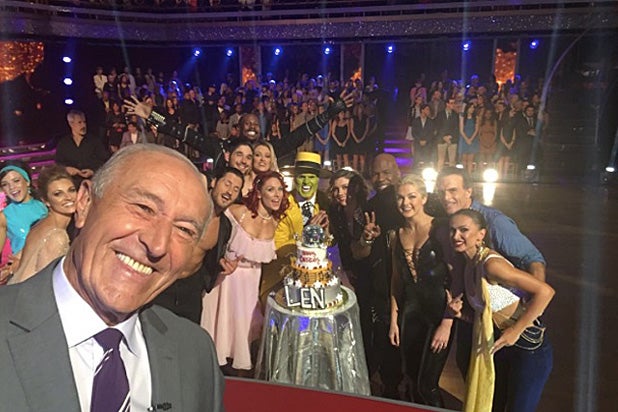 There were no eliminations on last week’s “Dancing With the Stars” — which meant that one unlucky contestant was on the chopping block Monday.

With their dances inspired by movies, TV shows or music videos, the quick-footed celebrities had a lot of inspiration to choose from for the latest round on Season 22 of the ABC reality contest.

Former New England Patriots quarterback Doug Flutie has a Heisman Trophy to his name, but he won’t be adding the Glitter Ball to his collection, as he was unfortunately sent home on Monday.

Just like when he used to play football at Foxborough’s Gillette Stadium, Flutie departed with the crowd chanting his name. Co-host Erin Andrews said a sad farewell to her fellow New Englander.

After having a terrible partner swap the week before, “Real Housewife” Kim Fields came back fighting despite her doctor telling her she has “indication of stress fractures” in her legs. Fields overcompensated for her injury with a flamboyant performance from “Hairspray,” which birthday boy Len Goodman said was a “terrific opening to the show.”

“Fuller House” star Jodie Sweetin was also battling an injury as she took on Pink‘s famous “Try” dance, which was another hit with the judges.

“I thought you performed it so well,” Goodman said. “I know there was a little struggle getting into the lift, and that lift is so iconic, but you pulled it off.”

Super Bowl MVP Von Miller channeled the legendary Michael Jackson and had to learn all of the King of Pop’s mannerisms along with the dance moves for “Bad.”

Bruno Tonioli was full of praise for Miller’s recreation of his icon, calling it “bad ass … the key of it was hitting those moves like lightening,” he praised. “Overall, you did a fantastic job.”

Meanwhile, MMA fighter Paige VanZant proved how groovy she was with a colorful rendition of “Soul Bossa Nova” from “Austin Powers,” as UFC president Dana White cheered from the audience.

Also Read: 'Dancing With the Stars' Sees Another Contestant Bite the Dust During Disney Week (Video)

The performance was a knockout with Goodman, who said there “was nothing about it that he didn’t like,” before awarding them a perfect 10.

Not only does Nyle DiMarco have to deal with not being able to hear, he had to cope with wearing a clunky headpiece to recreate Jim Carrey in “The Mask.” Despite the slapstick comedy and the interpretation of the character, the former “America’s Next Top Model” contestant managed to maintain the Quickstep throughout, Tonioli told him. But Carrie Ann Inaba said it wasn’t as  crisp as it could have been.