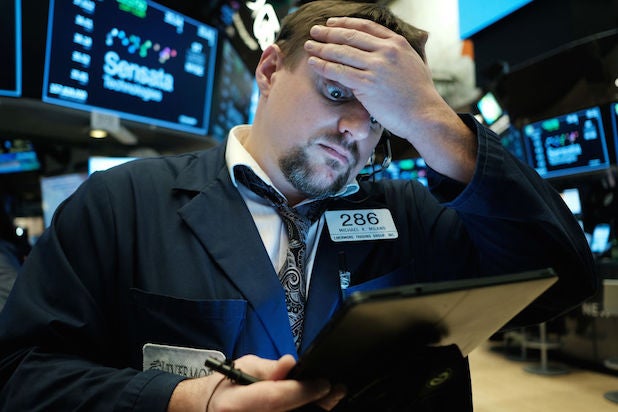 The Dow Jones industrial average, after sharp declines from major companies like Apple and Disney, had its worst single-day point drop ever on Thursday, plunging 2,352 points to close at 21,201 points. The 10% fall also represented the biggest single-day percentage drop since Black Monday 1987, when the Dow plummeted 22.5%.

The historic point drop on Thursday comes only days after the previous record was set; fears over the coronavirus outbreak, coupled with an oil price war, sent the Dow down 2,013.76 points on Monday.

President Trump addressed the coronavirus outbreak on Wednesday night and announced the U.S. would ban travel from Europe — except for from the United Kingdom — for 30 days. On Thursday, the Federal Reserve said it would inject $1.5 trillion into Wall Street to curb the “highly unusual disruptions” brought on by the coronavirus. Those plans did little to stop the bleeding on Thursday, though, with several entertainment and tech companies absorbing major hits.

Shares of Disney, which is one of the 30 companies represented by the Dow index, fell 13% on Thursday to $91.81 per share. Less than a month ago, the company was trading near $140 per share, but the combination of coronavirus and the exit of CEO Bob Iger in recent weeks have led to a severe drop. California Governor Gavin Newsom on Thursday issued a directive banning gatherings of more than 250 people, but offered an exemption to Disneyland. “Disneyland, I think, has a thousand people on a ride every hour, and concerts and theaters. They have parades. That’s a nation state campus environment. I mean, that’s a whole different thing,” Newsom explained, according to the LA Times. Disney’s share price did not rebound, even following the governor’s announcement, on Thursday.

Hours later — and soon after markets closed on Thursday — Disney announced it would be shutting down Disneyland through the end of March.

Apple shareholders, meanwhile, had a rough day as well, with shares of the tech giant dropping 9.9%; the company closed at $248.23 per share and has dropped more than 20% since trading at its all-time high of about $327 per share in early February. Chief executive Tim Cook warned shareholders last month the company could be especially hit hard by the coronavirus outbreak, which impacted the company’s iPhone production in China.

The S&P 500 and Nasdaq experienced similar drops on Thursday, with both indexes plunging more than 9%.

During a meeting with Irish Prime Minister Leo Varadkar on Thursday, President Trump said he expects the market to “bounce back very big” in the near future.