“Downton Abbey: A New Era” is on the way, and on Wednesday, Focus Features dropped a first look at the Grantham Family in new images from the sequel film.

Lord Grantham (Hugh Bonneville) and Lady Mary (Michelle Dockery) stand on the majestic staircase at Downton in one of the new images.

Another shot reunites kitchen staff Daisy (Sophie McShera) and Mrs. Patmore (Lesley Nicol), clearly working away on an exquisite meal service for the family and their guests.

Lady Edith (Laura Carmichael) and Tom Branson (Allen Leech) appear to be out for a doubles match with their respective love interests — Bertie Pelham (Harry Hadden-Paton) and Lucy Smith (Tuppence Middleton) — in another snap.

The official teaser trailer for the film will air ahead of showings of “Belfast” in theaters this weekend, but you can catch a sneak peek at the top of this page.

While plot details for the film have been sparse, writer Julian Fellowes told People that Lady Mary continues to run Downton as the mother of the next Earl of Grantham.

“As we know from the last film, Mary may not be the titular head of the household, but she is effectively running the show. We take that further,” Fellowes said. “We’re trying to mark the change — the fact that Crawleys of Downton are nearly in the 1930s, which is merely the beginning of the modern world.” 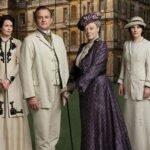 Also Read:
‘Downton Abbey’ Sequel Gets a Title and Teaser at CinemaCon