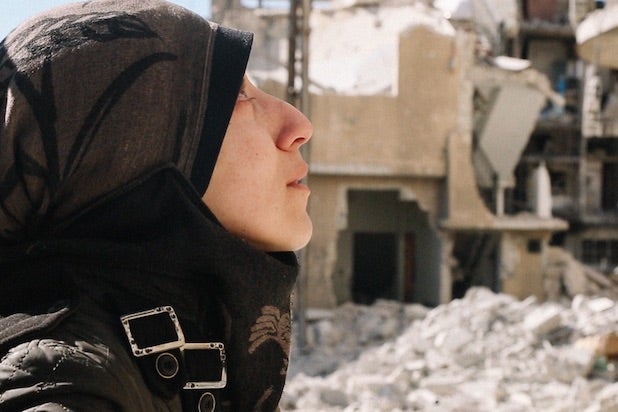 Dr. Amani Ballour, the doctor whose underground hospital was the subject of the Oscar-nominated documentary “The Cave,” has been awarded the Council of Europe’s Raoul Wallenberg Prize for her work treating victims of Syrian bombings.

“Human rights and personal dignity are not a peacetime luxury. Dr. Amani Ballour is a shining example of the empathy, virtue and honour that can flourish even in the worst circumstances: in the midst of war and suffering,” said Marija Pejčinović Burić, the Secretary General of the Council of Europe.

“The Cave” follows the work of Dr. Ballour and her medical team at a field hospital built within a cave in her hometown of Eastern Ghouta near Damascus. It is estimated that from 2016 to 2018, Ballour saved thousands of people who were critically injured by airstrikes and chemical weapon attacks, including those on nearby hospitals.

The violence finally forced Ballour to close The Cave and flee Syria, and today she lives in Turkey as a refugee. She has spoken out about the atrocities she has witnessed and the nightmares that have made it psychologically painful for her to do any further direct medical work with patients.

“There are children I cannot forget, it’s impossible to forget them,” Ballour told National Geographic, who is distributing “The Cave.” “There were children I’d treat in the pediatric ward (for asthma and other ailments) and then I’d see them when they’d been wounded. It was like working on family. I couldn’t look into their eyes when I worked on them. Sometimes I’d crash, I’d break down.”

The Syrian director of “The Cave” is currently unable to attend the Oscars as the U.S. State Department has denied his request for a visa. Fayyad, who currently lives in Copenhagen, was granted a three-month visa in September, but his latest one was denied because an executive order from the Trump administration prohibits citizens of Syria and six other predominantly Muslim countries from entering the U.S..

When the Oscar nominations were released, Fayyad thanked the Academy for nominating “The Cave” for Best Documentary Feature alongside “For Sama,” another documentary about Syrians attempting to survive the ongoing bombings. He also lamented that his film even had to be made.

“The genocide still happening in Syria is one of the worst humanitarian crises of our time with hundreds of thousands of people dead and millions displaced, in large part because of the negligence of the world,” he wrote.

“I wish I was still in Damascus drinking coffee with my artist friends. I wish Dr. Amani was still a thriving young Syrian pediatrician. I wish little Sama was with her friends on a playground in Aleppo. I wish my parents hadn’t been forced to leave our childhood home in Idlip. But instead we are all dead or in exile, and my country as it was is lost forever. All I can do now is speak out, loudly, so this doesn’t happen again. And I will not be silenced.”

Several Hollywood groups, including the International Documentary Association, have publicly called for U.S. Secretary of State Mike Pompeo to allow Ballour and Fayyad to travel to the U.S. to attend the Oscars. National Geographic tells TheWrap that Ballour also requires an exit visa from Turkey, which has not been granted. Producers Kirstine Barfod and Sigrid Dyekjær are currently set to attend the ceremony with members of the film’s production team.