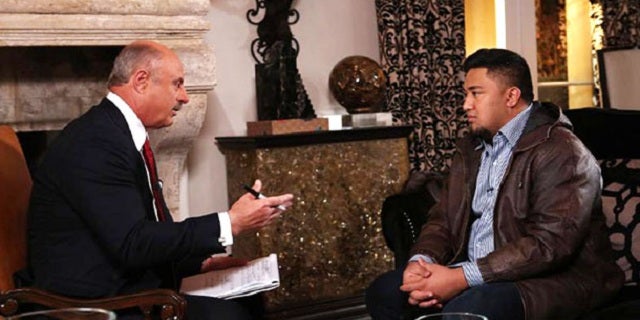 Manti Te'o's girlfriend might have turned out to be fictional — but she's helped to spark a very real lawsuit.

Peteski Productions, one of the producers on syndicated talk show "Dr. Phil," has filed a suit against Gawker Media over an episode of the series that featured an interview with Ronaiah Tuiasosopo, who claimed to have perpetrated the girlfriend hoax against Te'o.

In the suit, filed Tuesday in U.S. District Court for Eastern District of Texas on Tuesday, Peteski claims that Gawker-owned sports blog Deadspin published the Feb. 1 episode of "Dr. Phil" — on which Tuiasosopo demonstrated "the voice" of fake girlfriend Lennay Kekua, which he used to dupe Te'o — before the episode aired to most of its audience.

According to the lawsuit, Deadspin's early posting of the episode — the second of a two-part interview with Tuiasosopo — had a negative effect on the episode's ratings, because it spoiled the cliffhanger of whether he would demonstrate the Kekua voice.

"In a premeditated plan to steal Peteski's copyrighted material, Deadspin posted the video of the second show to the Deadspin blog not later than 9:30 a.m. Eastern Standard Time, hours before the Dr. Phil Show aired to over 98 percent of its viewers," the complaint reads. "Although the second show was expected to exceed the ratings number of the first show, in fact, the ratings declined substantially because the the result of the 'CLIFFHANGER' was no longer in doubt. It had been misappropriated by Deadspin."

The lawsuit, which characterizes Deadspin and Gawker as "serial copyright infringers," claims that Deadspin infringed the copyright on a "CBS This Morning" story involving Te'o as well.

Te'o, formerly a linebacker on the Notre Dame football team and a Heisman Trophy finalist,  captured national attention with a heartstring-tugging story about how his "girlfriend" had died on the same day as his grandmother, and how he vowed not to miss any games as a promise to Kekua. He again gathered headlines when it was revealed that Kekua didn't exist, and Tuiasosopo subsequently admitted to perpetrating the hoax by luring Te'o into a bogus online relationship on "Dr. Phil."

Peteski is seeking unspecified damages in the suit.

Deadspin editor-in-chief Tommy Craggs has not yet responded to TheWrap's request for comment.