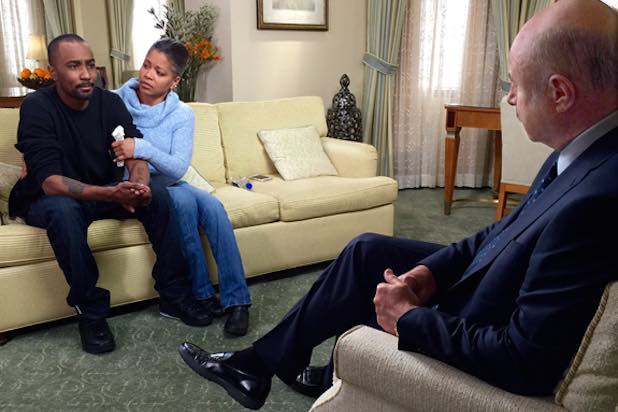 While Bobbi Kristina Brown fights for her life in the hospital, Nick Gordon‘s “life hangs in the balance,” according to his mother who will appear at his side during a Dr. Phil “intervention” set to air on March 11.

“As we sit here right now, my son’s life hangs in the balance,” Michelle Gordon told the TV personality in an episode they already filmed. “When Whitney was found, he administered CPR to her and called me as he was standing in front of her saying, ‘Mom, why couldn’t I do it? I couldn’t get air into her lungs.’ He won’t let go of the guilt.”

Dr. Phil, real name Phil McGraw, will offer drug and alcohol treatment to Gordon, who will detail the severe pain, mental anguish and panic attacks he has been suffering since Bobbi Kristina was found face down and unresponsive in their Atlanta-area home on Jan. 31.

According to the synopsis for the episode described as an “emotionally charged intervention,” Gordon has been struggling since Bobbi Kristina’s famous mother, Whitney Houston, was found dead in a hotel bathtub three years ago.

Dr. Phil took to Twitter on Thursday to tease the episode by sharing Gordon is “distraught and out of control.”