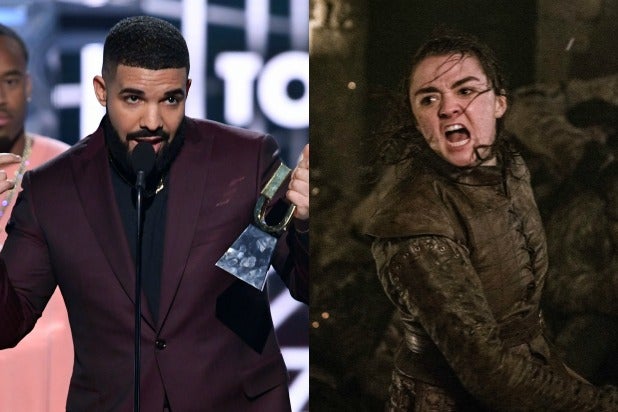 Arya Stark (Maisie Williams) may have killed the Night King — but Drake may have just killed Arya Stark with his own personal endorsement.

While accepting the award for the Top Billboard 200 Album for “Scorpion” at the 2019 Billboard Music Awards on Wednesday, Drake thanked several people who helped him snag that trophy. And then he gave a very specific reference to the baddest girl in Westeros for singlehandedly killing the Night King and thus his entire undead army during the Battle of Winterfell on last Sunday’s “Game of Thrones.”

The congrats was very sweet and a cool nod to all the “GoT” fans in the house and watching at home — until some of them realized Drake may have just jinxed the young Stark girl.

Yeah, see, Drake has a bit of a reputation for “cursing” athletes and teams he publicly backs. Purported victims include the Alabama Crimson Tide (who lost the 2019 college national championship), Connor McGregor (who lost a 2018 fight after inviting Drake to the weigh-in) and the 2013 Toronto Raptors. So now some fans on Twitter are worried Arya’s mortality is at risk, thanks to Drake’s love.

“Cersei sent Drake to kill Arya with his weapon of choice: The Curse,” one user tweeted. “Drake’s curse better not apply to fictional characters! Arya Hive don’t play,” another wrote.

So what do we say to Drake? Not today.

See some of the best reactions — and concerns — for Arya below.

Cersei sent Drake to kill Arya with his weapon of choice: The Curse pic.twitter.com/WfAr2P6HHX

Arya must not die in Episode 4????… Drake's curse pic.twitter.com/kxg5aTsI2O

Welp, #RIP to Arya Stark. She has no chance now. #Drake #GameOfThrones #GoT pic.twitter.com/qCSmFOMaj2

Arya doesn't need Drake's curse!! If she dies Sunday, we ride at dawn!!!

Drake about to curse Arya, RIP