There are four teams vying for a trip to Super Bowl XLIX in Glendale on February 1, but two hip hop superstars are already earned their way there: Nelly and Drake.

Nelly will host Playboy’s legendary Super Bowl party at the W Scottsdale on Friday, January 30, TheWrap has learned. One night later, on January 31, Drake will host a pop-up of Bootsy Bellows in the same place. 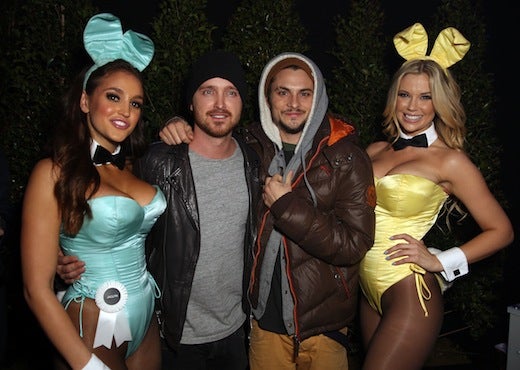 This year, the “Hot in Here” and “Cruise” singer has accomplished something that few playmates ever do – a repeat appearance.

He is only scheduled to “host” for 1,200 people on the hotel roof, but experience suggests guests will likely see a microphone in his hand. The Captains of Industry, the DJ duo who are regulars on the Hollywood event circuit and high end clubs, are guaranteed to spin. They are “your favorite DJs favorite DJs,” a self-annointed title that is hard to dispute.

In New York City last year, Playboy drew so much traffic to the west side highway location on Friday night, that police shut down streets in the area. Flash forward to the Playboy party at Comic-Con in July 2014, another long line, another “shut-down”. Word to the wise – get there early, especially if you are paying.

In a departure from tradition, a limited number of tickets are officially for sale. (Playboy warns that any other sites selling tickets to the MINI and Dryworld sponsored party are fake, and will not be honored.)

For a generation of men who grew up hearing about the Playboy Super Bowl party (one of the originals along with the now defunct Sports Illustrated party), there is a potential buy-in. They run from $650.00 – $950.00, while Super Bowl tickets themselves start at $2,345 on Stubhub, as of January 13.

No tickets available for Bootsy Bellows’ bash – invite only.

John Terzian, Brian Toll, and Markus Molinari’s nightlife brand comes to the Super Bowl for the second time, and will take over the W one night after Playboy, bringing Drake with them.

The scene at Bootsy Bellows’ NYC pop up last year, the least public of the high profile parties. (Mikey Glazer)

Drake, who hosted the ESPYs last year, is no stranger to private events like this. At the height of Blackberry’s popularity in 2010, he hosted a party in Miracle Mile where new devices were handed out like passed hors d’oeuvres and had a memorable snowy performance at Sundance inside Microsoft’s Bing Bar a few years ago.

For more on the upcoming Super Bowl scene, click over to: Super Bowl Parties 2015: TheWrap’s Guide to Best Invites in Phoenix (Updating)