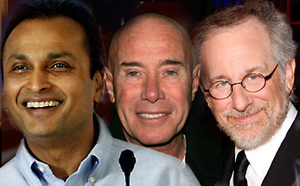 It’s official. The DreamWorks dream team is leaving Paramount and has signed a deal to make movies over the next several years with the huge Indian media conglomerate, Reliance.

The deal ends an acrimonious three-year relationship with Paramount. Predictably, this has been the focus of the media coverage: the tit-for-tat, ego-centric, who-won-and-who-lost scorecard. Did Paramount lose more, or did DreamWorks? Who should be more embarrassed? Did Geffen fail? Did Brad Grey? Is Sumner peeved?

This coverage misses the huge shift in the Hollywood landscape that the Reliance deal may ultimately herald. It provides Steven Spielberg and his colleagues with a total of $1.2 billion to bankroll their company and make new movies, $500 million from Reliance ADA, and $700 million in bank-financed credit.

This is an unprecedented alliance, and I believe it heralds the start of a new era. Hollywood’s most sought-after nexus of creativity and influence is combining forces with a media powerhouse in a rising market abroad. By sinking billions of dollars into their media and entertainment strategies, Dubai and Abu Dhabi have opened yet another new frontier of influence, and it has broad implications for the movie industry in a period when the fundamentals of the industry are shifting.

The Old Hollywood is dying. A New, hybrid Hollywood is rising to take its place. Those who want a place in that new cosmos ought to be paying attention. The crisis in American banking only underscores the reality that credit is going to become ever tighter within our borders. The vistas of growth are abroad, and they predominate in cash-rich markets where American film has a relatively low profile.

As for the tit-for-tatness of it all, Variety’s story has more details, and seems to take the view that this deal somehow works in favor of Paramount, which I don’t quite get. Either way, Paramount is holding on to the properties developed at DreamWorks, since it did indeed buy the studio. Meanwhile Paramount announced that it had "waived" certain provisions of its original deal, in order to "facilitate" getting DreamWorks out the door.