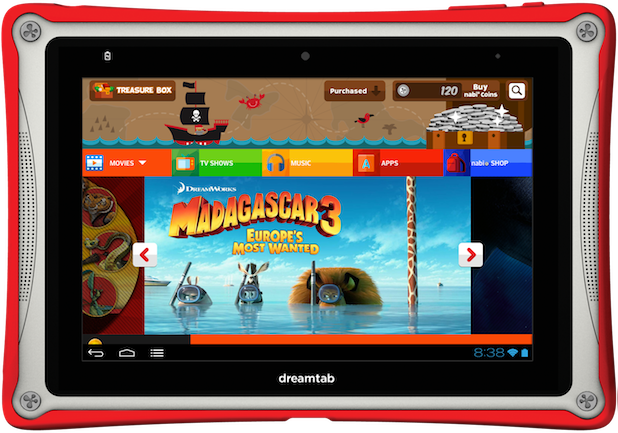 The tablet, which will be unveiled at the Consumer Electronics Show in Las Vegas next week, will go on sale in the United States in Spring 2014 and be released internationally later this year.

Fuhu, a California-based company with offices in the United States and across Eastern Asia, is one of the fastest growing private companies in America. It designed the nabi tablet, the technological foundation for the DreamTab.

For DreamWorks Animation, this marks the continued extension of its brand into new arenas for the digital-savvy kid. The film studio has expanded into television, acquired a prominent YouTube network and is opening up amusement parks and other consumer experiences across the globe based on its film properties.

The company’s artists for movies like “Shrek,” “Kung Fu Panda” and “How to Train Your Dragon” will give one-one-one video lessons on the DreamTab, teaching kids how to draw their favorite characters using the same stylus tool the artists used for the movies. The tablet will also come equipped with games related to DreamWorks Animation movies. The first, School of Dragons, will feature the animation studio’s “How to Train Your Dragon” franchise.”

“Fuhu grabbed our attention when they came on the market because they single-handedly made a quantum leap forward in revolutionizing the kids tech space; as their company grew, we saw an incredible opportunity to join with them to take the overall tablet experience to a whole new level,” Jim Mainard, DreamWorks Animation’s Head of Digital Strategy, said in a statement. “The DreamTab posed a compelling challenge not only to our filmmakers and artists to create content for this new medium, but also for our engineers and innovators who worked hand-in-hand with the Fuhu team to develop the consumer- facing side of this groundbreaking technology.”

Also read: ‘How to Train Your Dragon 2’ Trailer Sends Dragons to War (Video)

The tablet’s native entertainment properties include nabi Play, which will feature kid’s programming from DreamWorks Animation as well as Nick, Disney and Cartoon Network, and a curated App Zone and Treasure Box that sell apps, music and movies.

The two companies have gone out of their way to assuage parents’ fears about a kids-specific tablet as the DreamTab comes equipped with parental controls and emails/texting services that comply with child privacy rules.

The tablet will sell at 8 inches and 12 inches.