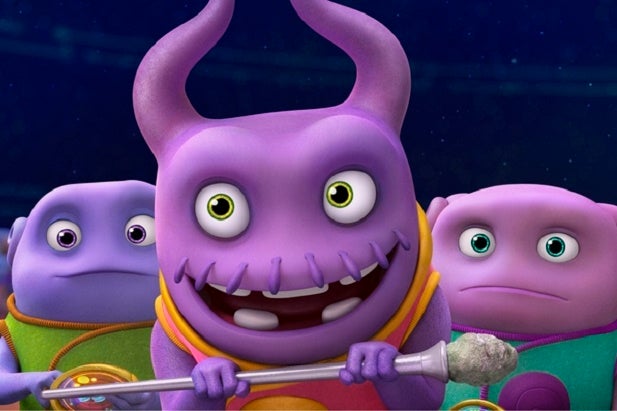 DreamWorks Animation’s “Home” blasted off with a $19.2 million flourish at the overseas box off this weekend. That’s good news for the studio and the film, both of which could use a boost ahead of its opening in the U.S. on Friday.

“Divergent the Series: Insurgent” and “Cinderella” were first and second at the foreign box office this weekend, just as they were domestically. The sci-fi sequel brought in $47 million from 77 markets in its overseas debut for Lionsgate, and Disney’s fairy tale update brought in $41.1 million from 46 markets in its second week. Fox’s “Taken 3” opened in China  and earned $18 million, raising its foreign total to $224 million.

The best market for the Fox-distributed “Home,” a computer-animated family tale of an Earth invasion by particularly inept aliens, was the U.K. It opened at No. 1 there with $9.3 million, topping the debuts of “The Croods” and “Despicable Me.”

, , and lend their voices to “Home,” which is based on Adam Rex’s 2007 children’s book “The True Meaning of Smekday” and was adapted by Tom J. Astle and Matt Ember. directs.

“Home” will be the first release for DreamWorks Animation since it reported a fourth-quarter net loss of $247 million and said it plans to sell its Glendale headquarters in February. A month earlier, DWA announced a massive restructuring plan that included layoffs and brought in new leadership for its film unit.

“Home” is projected to open with $28 million next weekend by BoxOffice.com, and hit $89 million domestically. Those numbers would put a lot of pressure on the film to perform overseas, given its $130 million production budget.