Excerpted with permission from "The Men Who Would Be King: An Almost Epic Tale of Moguls, Movies, and a Company Called DreamWorks," published by Houghton Mifflin.

The scope and breadth of DreamWorks’ ambitions reflected the go-go nineties — a time when the economy was surging, Bill Clinton was in the White House, and a still mysterious resource known as the World Wide Web was about to change everything. But its expansiveness was also reflective of its resident rainmaker: director Steven Spielberg.

It was not because of former Disney über-executive Jeffrey Katzenberg, or David Geffen, the billionaire music impresario, that DreamWorks — the first Hollywood studio to be formed in 60 years — was getting into the videogame business or mulling over the creation of entertainment centers where families could chow down on hamburgers and zap space invaders (what would be known as GameWorks). 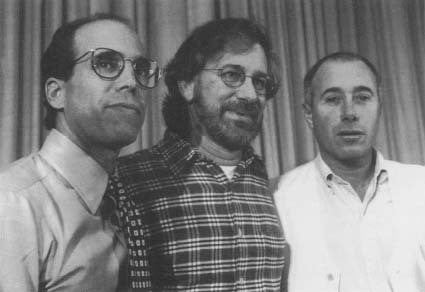 The company was molded around the ideas and dreams of its resident man-child, the inspiration for DreamWorks’ newly unveiled logo: a little boy sitting on the edge of the crescent moon, casting his fishing line into the stars. Whenever a wish materialized in Spielberg’s endlessly imaginative mind, it was up to Geffen and Katzenberg to wave their magic wands and make it come true.

Even when Spielberg’s partners did not necessarily see eye to eye with him — such as over building a studio at Playa Vista (Geffen, in particular, was skeptical) — they came through for him, understanding all too well that the star that made DreamWorks SKG shine so brightly, that had the media doing somersaults, the investors lining up for lunch in the Amblin dining room, was not what the K or the G in the company’s initials represented but the S. Which is why the S came first.
Whatever the size of their egos, neither Geffen nor Katzenberg had any illusions about the supremacy of Spielberg’s agenda. As Geffen put it: “When we first started DreamWorks, I said to Jeffrey, ‘We ought to call this new company the Spielberg brothers. Anything Steven thinks is important, we want to invest in.’”
The tricky part for Katzenberg and Geffen, however, was not just catering to Spielberg, but making certain that he stayed focused. According to Bruce Jacobson, co-head of DreamWorks’ videogame division, Katzenberg was often heard saying, in his sports-talk lingo, “This is a town where the batting average is 210 and where you’re profitable if you bat 290. I’ve got like a 410, and Steven bats 667. My mission in life is for Steven to swing as many times as he can and, with all due respect, I should be taking a few swings at bat, too.”
Already, this aim had been somewhat derailed, given Spielberg’s insistence on directing for other studios. What Steven wanted also determined how DreamWorks’ live-action studio would be run and who would run it — which, to the shock of Hollywood, was not going to be Katzenberg, despite his nearly 20 years of studio experience at Paramount and Disney.
At the time when the live-action duties were being divvied up at DreamWorks, Katzenberg’s Touchstone track record was being assessed more from its back than from its front end. Everyone had witnessed his losing streak during his twilight years at Disney, when the company started forsaking its live-action formula of simple, accessible story lines and reasonable budgets. Not only were there fewer hits toward the end of Katzenberg’s tenure, but they were costly ones, such as "V.I. Warshawski" and "Newsies," a musical about a singing newspaper boy in the Depression. 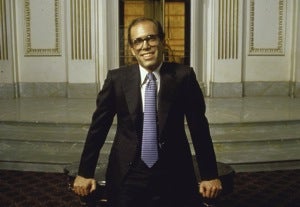 Disney chairman and CEO Michael Eisner had had concerns about the latter movie, but had let Katzenberg go with his gut, which, in this case, misled him terribly; the film lost $42 million. Katzenberg was blamed for all of them, even flops such as "Cabin Boy," which he’d had major doubts about but pushed through for Eisner’s sake.
That Spielberg apparently deemed him not ready for primetime must have come as a shock to Katzenberg, too. Already, he’d begun talking to Touchstone executive Donald De Line about coming to DreamWorks, obviously feeling he was in the position to make such decisions.
But it soon became evident that Spielberg would be ruling his turf without any input from his new partners. He’d handed the keys to his cherished kingdom to his best friends, producers Walter Parkes and Laurie MacDonald, whom he had convinced to sign on to fun the live-action studio by promising them that they could continue to produce movies even as they served as studio executives with management responsibilities.
For Spielberg, it was a no-brainer: he believed in the couple, trusted them above anyone, and valued their sophistication, class, and taste. Where these qualities were concerned, Katzenberg was at a distinct disadvantage.
Moreover, Parkes had recently brought Spielberg in as an executive producer on a film he was producing at Sony, "Men in Black." A sci-fi comedy starring Tommy Lee Jones and Will Smith with a $90 million budget, the film was planned as a summer “tentpole,” and if all went accordingly, Spielberg’s would be in for a windfall. As an executive producer — i.e., doing little more than lending his name to the picture — Spielberg was to receive a generous portion of first-dollar grosses. 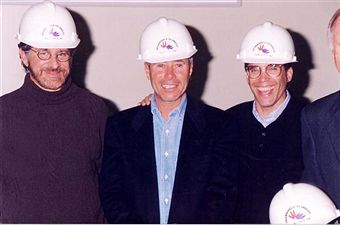 “I’m not saying Steven was bought,” said one source. “But Walter brought him a very successful franchise that had nothing to do with Steven, at Sony, and he asked Steven to come in on it. That’s a good thing.”
According to several sources, Katzenberg’s exclusion from the live-action studio was mainly about taste, and the perception was that Katzenberg, despite his many strengths, didn’t have enough of it to create a pedigreed live-action division that produced both blockbusters and Oscar-winners.
“It’s hard enough to find 15 decent movies, of which, you hope three of them are great,” said one insider. “But the idea that both Touchstone and Hollywood Pictures were churning out 20 movies a year — and there was nothing but drek. Jeffrey would probably say it was mandated by their pipelines, but what it really looked like was that Jeffrey had no taste.”
Katzenberg’s entire attitude toward moviemaking — cheaper, faster, better — clashed resoundingly with Geffen’s, whose philosophy, à la Lew Wasserman, the legendary head of Universal Pictures, was to always go for the best. According to one source, Geffen, who prided himself enormously in having refined taste, would cringe when Katzenberg talked about movies in terms of “singles and doubles.”
“David doesn’t do baseball,” this person said. “He likes quality. So David sentenced Jeffrey to animation. He said, ‘That’s what you’re good at.’” 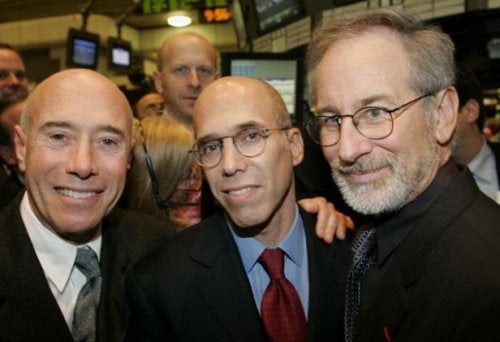 Katzenberg gave no indication of being upset by his exclusion from live action, but according to a longtime friend, he was deeply pained. “He’d never admit it, but absolutely,” this person acknowledged.
Another source said: “Jeffrey wanted live action. It was an embarrassment to him when he didn’t get it.” It was Katzenberg who had gotten the ball rolling on the company, after all, and he idolized Spielberg and trusted Geffen to champion his unlimited ascension.
Of course, control of animation was unquestionably Katzenberg’s, but live action was DreamWorks’ jewel in the crown.
Whatever Katzenberg may have felt, there was no time for self-pity, even had he been inclined toward introspection, which, friends say, he was decisively not.
A studio had to be built and movies needed to be made.
(Excerpted from "The Men Who Would Be King: An Almost Epic Tale of Moguls, Movies, and a Company Called DreamWorks.")
***
Nicole LaPorte is the West Coast reporter for the Daily Beast.  "The Men Who Would Be King," published by Houghton Mifflin in May 2010, is her first book.
x