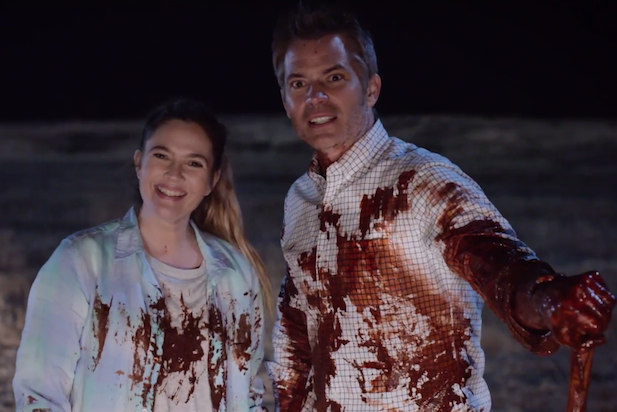 Drew Barrymore has picked quite the show for her first lead TV series role. On Netflix’s “Santa Clarita Diet,” she will play Sheila Hammond, a devoted wife, mother, real estate agent… and cannibal.

The first trailer shows Sheila discussing business with her husband, John (Timothy Olyphant), while they dispose of some bloody human organs in the middle of the night. It seems that one day, Sheila’s heart just suddenly decided it was going to stop beating. She’s now an undead creature with a craving for human flesh. But other than that, she’s still the same.

Despite this minor setback, Sheila still remains positive about the situation. She finds that her new appetite has given her more confidence in her life, and she wants to control these urges so she can continue to support her family. So, John and her kids have a plan: Friday night is killing night.

Basically, “Santa Clarita Diet” is similar to Julie Ducournau’s buzzy indie film “Raw,” (in theaters this spring) — but, you know, with jokes.

“We have to kill someone who deserves it,” says John. “I guess the prototype would be a young, single Hitler.”