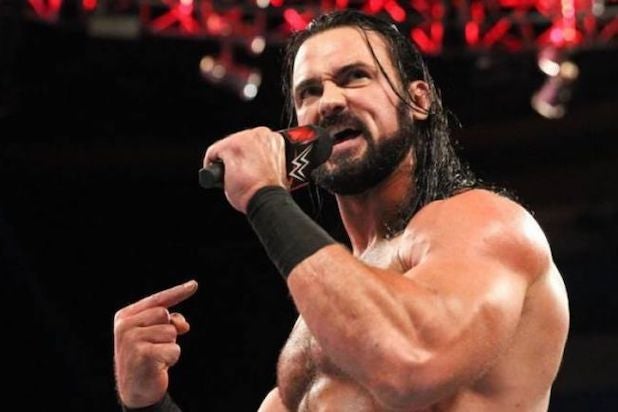 Drew McIntyre may not have a capacity crowd of 65,000 fans for his WWE Championship match against Brock Lesnar next weekend, but the veteran wrestler told TheWrap he can still have a “WrestleMania Moment” — albeit a quiet one.

The Scot’s explanation for how and why that’s still an option for him at WrestleMania 36, which has been moved to closed sets like the WWE Performance Center due to the coronavirus pandemic, is actually quite a beautiful one. Admit it: That’s not the adjective you were thinking we’d associate with the big bruiser.

(Though if you’ve read any of our previous interviews with McIntyre, you’d know he’s one of the most interesting and thoughtful guys in the game — when he’s not kicking people’s heads off in the ring, that is.)

“I’ve thought about this a lot myself,” McIntyre told us. “It’s unlike any WrestleMania ever, obviously, for one. Generally, a WrestleMania moment is– the big moment happens, you celebrate, people are going crazy, you get to celebrate with your family that are there in the front row. Backstage, everyone in Gorilla position is all celebrating with you and the locker room is so happy for you. That doesn’t exist this year.”

“Initially I was very disappointed, the way everything shook out. But then I started trying to think more about the bigger picture here. We’re still bringing everybody this show, and at this time it’s very important to keep people entertained,” he continued. “I can’t believe we’re bringing them ‘Mania — I’m proud of that.”

Unlike pretty much every other sports and entertainment event, WWE did not cancel WrestleMania 36 as COVID-19 became a pandemic. Vince McMahon & Co. instead moved the event from Tampa Bay’s Raymond James Stadium to Orlando’s WWE Performance Center. Since then, WWE has said WrestleMania will take place from multiple locations and over two nights: the event’s original Sunday, April 5 date and Sunday, April 4. The biggest show in pro wrestling will stream on the WWE Network and be available via pay-per-view.

Also Read: WWE's Drew McIntyre on Why He Finishes With the Claymore Kick Over the Inverted Alabama Slam

“What if I pull it off and I’m sitting there in the ring by myself with the title, with the record crowd of zero?” McIntyre, a member of the “Monday Night Raw” roster, said. “The only time after I’ve won big titles in the past that I’m sitting there with them by myself is when I get to the hotel room. That’s when the real emotion comes out. The only other person who’s ever been with me at that time is my wife. She’s the only one who gets to see me when I really let my guard down.”

“That’s how I see this,” he continued. “Maybe this is gonna be a glimpse inside — the kind of situation that nobody gets to see. They get to see us win, they get to see us scream, be happy, maybe be a little emotional in the moment. But it’s more crazy adrenaline and feeding off the people. This time, it could be ‘1, 2, 3 — nothing.’ Brock and [Paul] Heyman leave, I’m sitting there with the title. But I can assure you, that camera’s gonna capture exactly what’s going on in my head.”

And what would be going on in his head? With the exception of the cobwebs and tweety-bird combination that come with Lesnar’s German suplexes.

“This 19-year journey, all these ups and downs,” McIntyre said. “The idea that that guy from 3MB worked his ass off and now main-evented WrestleMania — even though the situation it’s in — main-evented it with Brock Lesnar for the title and beat Brock Lesnar.”

“I think everyone’s gonna get a glimpse inside that private moment when I’m by myself, when I’m looking at that title,” McIntyre said. “Whatever emotion happens, I’m just gonna let it happen. Even if I get, like, upset, I cry or whatever — it’s not something I like to do on-camera, let the world see that side of me, but recently I’ve been letting go and letting people in a bit more. I think that moment could be very special.”

To borrow — and slightly alter — an Ivan Drago line from “Rocky IV”: “If he cries, he cries.” After all, are YOU gonna be the one to say something about that to the 6’5”, 265-pound Man (with a capital “M”) who goes by “The Scottish Psychopath”? We didn’t think so.

WrestleMania 36, which also features matches like John Cena vs. “The Fiend” Bray Wyatt and Roman Reigns vs. Goldberg, begins at 7 p.m. ET on both Saturday, April 4 and Sunday, April 5.