Two decades ago, Sydney Freeland’s hometown of Gallup, New Mexico, was labeled “Drunktown, USA” by a national news program. In elementary school at the time, the reservation-raised Freeland found it strange that journalists had descended into town mostly to point their cameras at the local winos.

“Drunktown’s Finest” is the first-time writer-director’s effort to humanize the struggles that have given way to Native American stereotypes about broken families, chronic unemployment, violent or criminal behavior, and, of course, alcoholism. Rather than dispel those stereotypes, though, Freeland spins them into moving human drama, achieving a delicate balancing act between heartbreaking realism and sincere optimism.

Set on a Navajo reservation (and executive-produced by Robert Redford), the film focuses on three interlocking stories about fractured souls searching for a sense of wholeness. The standout character among the trio is aspiring model Felixia (newcomer Carmen Moore), whose transgender identity is met with sympathy by her grandparents and lust by her johns, but remains a liability outside of her small social circle.

Entrepreneurial but acutely vulnerable, Felixia’s pursuit of a better life is perhaps all the more compelling for its unlikeliness to succeed. At an audition for a calendar shoot featuring Navajo women, she’s quickly recognized by a former schoolmate who used to know her as “Felix.” The winking gap between Felixia’s teeth on the side of her mouth tells her life story far better than her cherry-red nails or artificially bronzed hair ever could. She may be too destitute to afford braces, but she’s sexy and glamorous in her own way.

Felixia isn’t the most beneficial influence herself. She meets Sick Boy (a smoldering Jeremiah Bitsui) at a grocery store, and the two almost immediately start playing drinking games while his pregnant wife (Elizabeth Frances) waits for him at home. The film’s reservation is full of dysfunctional fathers, and Sick Boy aspires to buck the trend, but luck isn’t on his side. His fists get him into trouble early and often, colliding with the mugs of cops and family members. With Walter White wannabes as friends and a tendency to keep pounding shots — he used to think alcoholism was an inevitable life stage between adolescence and adulthood, he confesses to Felixia — Sick Boy’s hopes to provide for his family through an army career begin to slip away. 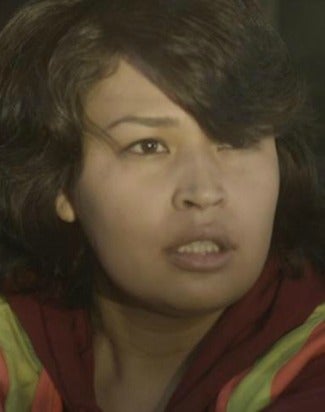 The character with the most promising future is Nizhoni (novice actress MorningStar Angeline), and yet she might be the most confused of the three. Adopted as a seven-year-old orphan by white parents, the college-bound high-schooler searches for the surviving members of her biological family. The growing tensions between Nizhoni and her vaguely racist parents feel heavy-handed, even when they’re believable. Also clumsy is her enormous naiveté, as when she dismisses two reservation residents’ beliefs as “superstition” while blithely informing them that she’s going to become a missionary because she enjoys helping people, seemingly unaware of the Christian church’s disastrous meddling in Native American communities.

She’s an apple, they decide: red on the outside, white on the inside. But that doesn’t explain how she encounters the film’s most striking image — that of a white horse with red handprints all over it — first in her sketch pad, then in real life.

The eventual convergence of these three plotlines proves rather satisfying, both emotionally and thematically. Moore and Angeline’s performances are occasionally flat, as are those of several of the supporting players, but it’s a treat to witness the rare mostly-Native American cast in action. (Human faces are wonderfully diverse, but the ones that usually end up on the big screen tend to be similar in a lot of ways.)

“Drunktown’s Finest” shouldn’t be viewed simply as an anthropological curiosity, though, but as the promising debut of a gifted filmmaker who wants to show the beating and hurting hearts of the people behind the headlines.