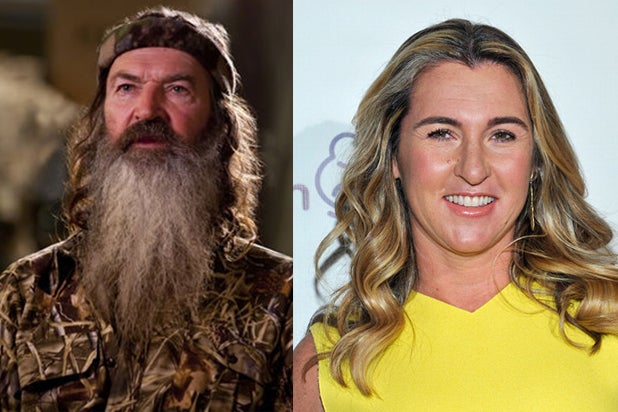 A&E’s top executive carefully considered whether to suspend “Duck Dynasty” star Phil Robertson over his anti-gay remarks, and ultimately decided his comparison of homosexuality to “bestiality” was over-the-line, a network executive told TheWrap.

The executive said that Nancy Dubuc, the CEO of A&E Networks, ultimately reached the suspension decision because Robertson’s remarks were in conflict with “the fundamental values of the company.” Dubuc was responding in part to the concern of employees within the company.

“She gathered all the information, assessed it, thought seriously about this,” said the executive.

Dubuc is one of the most powerful television executives in Hollywood, overseeing A&E, Lifetime and History channels. Her dynasty is powered largely by “Duck Dynasty,” the highest-rated reality show on the air.

The executive also said that arguments that A&E had somehow taken Robertson’s free speech away were ridiculous, as a suspension from a television show did not curtail his ability to speak out freely.

The executive said that any notion that A&E had a conflict with Christianity was also absurd, considering A&E’s History just aired the hit miniseries, “The Bible.”

The decision to suspend Robertson came Wednesday night, hours after an early-morning phone call between A&E executives and GLAAD, the civil rights group told TheWrap. A GLAAD spokesman would not say which executives were on the call.

“They took this very seriously, as soon as the news broke,” said Rich Ferrraro, the spokesman.

A&E initially released a statement from Robertson in which he said he would “never treat anyone with disrespect just because they are different from me.” But the network declined to comment itself until Wednesday night, when it announced the suspension.

“A&E decided to consider the company’s brand and corporate values over that of the show’s audience,” Eric Schiffer of Reputation Management Consultants told TheWrap. “It was a measure of deference to the larger company’s demographic.”

Both the network and GLAAD have gotten heat for their stand: Talk show host Sean Hannity gave out the numbers on the air Thursday of Dubuc and A&E chairwoman Abbe Raven, and both received personal messages on Twitter. Some called for a boycott.

GLAAD, meanwhile, said it has never received as many angry calls and emails about one of its positions as it did about “Duck Dynasty.”

“In the five-and-a-half years I’ve worked at GLAAD, I’ve never received so many violently angry phone calls and social media posts attacking GLAAD for us speaking out against these comments,” the organization’s vice president of communications, Rich Ferraro, told TheWrap.