Dominick Dunne had a front-row seat for some of America’s most famous trials. Here are some excerpts of stories he wrote for Vanity Fair, from the Claus von Bulow case to Robert Blake.

"The thought of writing had been lurking within me for some time, but I felt inadequate compared with the two famous writers in my immediate family — my brother John Gregory Dunne and his wife, Joan Didion. 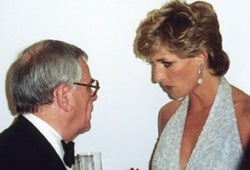 I didn’t actually begin until I finally removed myself from the glamorous world in Hollywood, in which I no longer belonged, and installed myself in a one-room cabin, without telephone or television, in the Cascade Mountains of Oregon. There I lived in virtual silence and timidly began my next career as a writer and a recorder of the social history of the time.

A tragic event in my personal life changed me forever. In 1982, my only daughter, Dominique, was strangled to death by a former boyfriend who stalked her. I had never attended a trial until my daughter’s murder trial. What I witnessed in that courtroom enraged and redirected me. It wouldn’t be necessary to hire a killer to kill the killer of my daughter, as I had contemplated. I could write about it. I could go on shows like Larry King Live and talk about it. I could become an advocate for victims."

From the same article:

"I knew from the first moment I walked in the door of the Vanity Fair offices in the old Conde Nast building, at 350 Madison Avenue, that at long last I had found the place I was supposed to be. The almost quarter-century that I have spent at Vanity Fair has gone beyond the wildest dreams of glamour and drama of my childhood. I have worked under two great editors, Tina Brown and Graydon Carter.

The places I’ve been. The people I’ve met. The extraordinary situations I have been in. The trials I have covered. As the nation watched, I was only a few feet away from O. J. Simpson when he was acquitted of stabbing to death his wife, Nicole, and her friend Ron Goldman.

I hate watching defense attorneys hug and shake hands with one another after they win an acquittal for a man they know is guilty. The man who strangled my daughter got a traffic-court sentence that let him out after two and a half years." 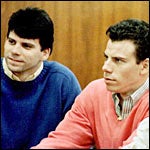 "On a recent New York–to–Los Angeles trip on MGM Grand Air, that most luxurious of all coast-to-coast flights, I was chilled to the bone marrow during a brief encounter with a fellow passenger, a boy of perhaps fourteen, or fifteen, or maybe even sixteen, who lounged restlessly in a sprawled-out fashion, arms and legs akimbo, avidly reading racing-car magazines, chewing gum, and beating time to the music on his Walkman.

Although I rarely engage in conversations with strangers on airplanes, I always have a certain curiosity to know who everyone is on MGM Grand Air, which I imagine is a bit like the Orient Express in its heyday.

The young traveler in the swivel chair was returning to California after a sojourn in Europe. There were signals of affluence in his chat; the Concorde was mentioned.

His carry-on luggage was expensive, filled with audiotapes, playing cards, and more magazines. During the meal, we talked.

A week before, two rich and privileged young men named Lyle and Erik Menendez had been arrested for the brutal slaying of their parents in the family’s $5 million mansion on Elm Drive, a sedate tree-lined street that is considered one of the most prestigious addresses in Beverly Hills. The tale in all its gory grimness was the cover story that week in People magazine, many copies of which were being read on the plane."

"When the telephone in my New York apartment woke me up at five o’clock in the morning on October 31, 1982, I sensed as I reached for the receiver that disaster loomed. Detective Harold Johnston of the Los Angeles Homicide Bureau told me that my twenty-two-year-old daughter, Dominique, was near death at the Cedars-Sinai Medical Center. I asked him if he had notified my wife. He said he was calling from her house. Lenny got on the phone and said, “I need you.”

“What happened?” I asked, afraid to hear.

“’The problem with Claus,” said one of Claus von Bülow’s closest friends at a Park Avenue dinner party, “is that he does not dwell in the Palace of Truth. You see, he’s a fake. 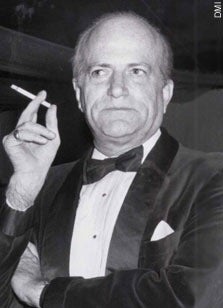 “Come in, come in,” said von Bülow expansively as he opened the front door to Helmut Newton, the photographer, who had just returned from Monte Carlo for the session, and me.

Von Bülow was standing in the marble-floored, green-walled, gilt-mirrored hallway of the Fifth Avenue apartment of his multi-millionairess wife, whom he was accused of twice trying to kill.

In the background a very old Chinese butler hovered, watching the master of the house usurp his duties.

On that May Sunday of the seventh week of his second trial, the Danish society figure was dressed in tight blue jeans and a black leather jacket."

"In New York these days, everyone is on edge. War is the main topic of conversation. Terrorism is on people’s minds. It’s like it was after 9/11. Get out of New York, people say. They’ll get the bridges and the tunnels. Start putting cash away, because the A.T.M.’s won’t work.

Credit cards won’t work — restaurants that are usually crowded at lunch aren’t now, the stores are not full.

If there are a lot of parties being thrown, I’m not being invited to them. I haven’t spent so much time at home in years. The town’s quiet. There’s not even any good gossip.

This downer atmosphere was lifted for me one day recently, however, when I had lunch at Michael’s restaurant with my friend Dan Abrams, whom I had met at the O. J. Simpson trial, when he was a young reporter making his name.

He now has his own show on MSNBC, and he is the chief legal correspondent at NBC. He’s hilariously funny, and we always have a good time discussing the various trials that are going on.

It’s impossible for any two people who went through the Simpson trial not to discuss the latest on O.J. whenever they meet, because that trial was an overwhelming experience.

Dan asked me if I had heard that O.J. was offering himself as a commentator to cover the Robert Blake trial on television.

Dan’s office had put in a call to Simpson’s lawyer Yale Galanter in Miami to get O.J.’s comments on the Blake hearing.

Galanter’s response was that O.J. was in discussions with two networks about being a paid analyst on the Blake murder trial. That seems in keeping with the current mad state of the world."