It’s been a long time, thanks to prior commitments and of course COVID-19, but production on Dwayne “The Rock” Johnson’s DC Comics movie “Black Adam” has finally moved along enough — it’s in post-production now — to make a teaser using actual, for real footage. You can watch it here right now in all of its surprisingly brutal, violent glory.

If you can’t watch yet, know that it’s definitely short, but even this brief look promises a very violent good time. In what looks like an ancient temple of some kind, a group of (I’m guessing) mercenaries — who somehow know that the name “Shazam” has magical powers (uh oh) — have (whoops) woken up up Black Adam. For what purpose, we don’t know, but if they thought they were waking up a potential ally or asset, too bad. Black Adam grabs one of the soldiers by the neck and reduces him to a pile of ashes. The end.

I mean, we all know that Johnson is always extremely credible whenever he brutalizes people onscreen — honestly all action stars should learn pro wrestling skills — but he looks like he’s having the time of his damn life in the teaser and we’re honestly very much into that. 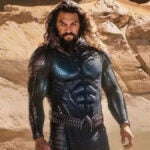 The first look at how the Justice Society will appear onscreen came on last summer during the first installment of DC FanDome, courtesy of two “Black Adam” teasers introduced by Johnson. The clips, which were motion-comics created entirely using concept art, explained that Black Adam was once a member of an advanced ancient civilization chosen by the Council of Wizards — the same group whose last surviving member gave Billy Batson his powers in 2019’s “Shazam!” — to liberate his people from slavery.

However, Black Adam’s brand of Justice was too cruel and vindictive and in response, the Council imprisoned him, seemingly for all eternity. But 5,000 years later, he escapes — and yeah, now we know how — and sets out to continue what he started. This time, superheroes have emerged, and four of them — Cyclone, Atom Smasher, Dr. Fate and Hawkman — unite as the Justice Society to challenge Black Adam. See how Cyclone looked in that concept art, and read more about the teasers here. 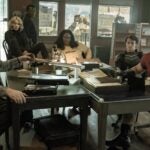