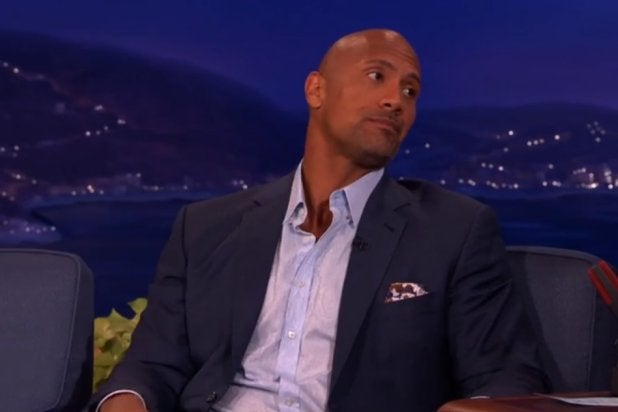 Hercules is one of the most powerful and intense figures of Greek mythology, and so Dwayne “The Rock” Johnson wanted to be authentic to that intensity in his portrayal. For the pivotal moment in his upcoming film, “Hercules,” the actor poured every bit of himself into it … and immediately blacked out.

It’s the moment when Hercules is chained to the ground and finally embraces his heritage as the son of Zeus. “It’s the moment of the movie — the movie hinges on this moment — and with everything I could possibly do, I just let it all out,” Johnson said on “Conan.” “‘I am Hercules!’ And I’m screaming, and all this adrenaline.”

He then proceeded to talk about how the human body generates adrenaline for sporting events and other activities, and then lets the adrenaline go to help the athlete achieve greatness. As a former professional wrestler, he knows a lot about channeling adrenaline and pouring it into a performance. In this case, though, his hands were shackled and he was essentially immobile.

Conan O’Brien and Andy Richter had a field day with this one, with Richter quick to point out that Johnson was calling it “blacked out” instead of “fainted.” He then mimed a dramatic faint as Hercules, with O’Brien offering him fake smelling salts to revive him.

The conversation was so derailed that when it came time to actually roll the “Hercules clip Johnson was there to promote, he said, “F–k that clip!” He was laughing too hard.

The clip did ultimately get shown, which pleased O’Brien as it featured Johnson picking up and hurling a horse … and that’s not something you see every day.