Kevin Hart dropped by the set of Dwayne Johnson’s “Fast & Furious” spinoff, “Hobbs and Shaw,” where they talked about creating “opportunities that entertain the world.”

“We f— with each other all the time because it’s what we love to do and the world loves it too, but we also have a mutual hunger to build out our enterprises and create opportunities that entertain the world,” Johnson said on Instagram.

“We’re lining up some very big things for the world to enjoy.” 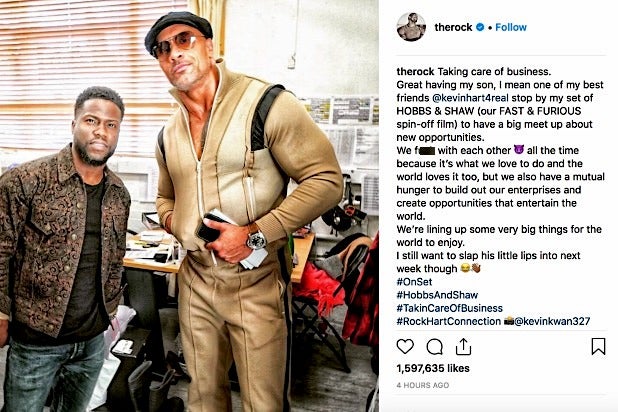 Hart and Johnson are set to star together again in the untitled “Jumanji: Welcome to the Jungle” sequel, which is set for release on Dec. 13, 2019.

The two last “interacted” when Hart appeared on “The Tonight Show Starring Jimmy Fallon” and attempted to call Johnson. Johnson twice rejected his calls, but then quickly answered when Fallon rang him over FaceTime.

“Kevin, to me, is like a little gremlin that I just want to take him and throw him into oncoming traffic,” Johnson joked via FaceTime on “The Tonight Show” back in September.

And Johnson didn’t let Hart off the hook this time either. “I still want to slap his little lips into next week though,” Johnson joked.

How does Johnson’s role in ”Jungle Cruise“ stack up?