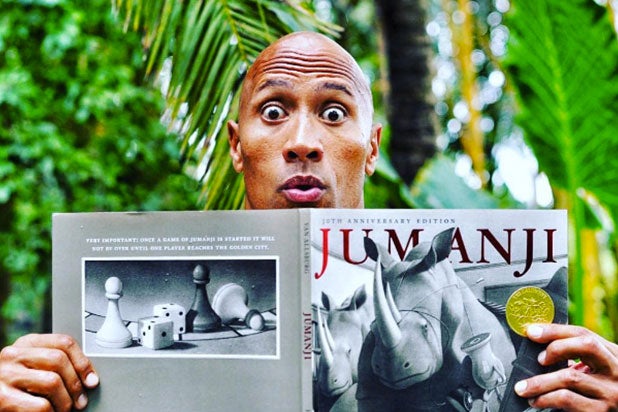 “Jumanji” fans, rejoice — the upcoming reboot is, in fact, not a reboot, but a “continuation” of the franchise, Dwayne “The Rock” Johnson says.

“Now in two weeks I’ll reunite with ol’ friends Kevin Hart & Jack Black and we have the honor to introduce a whole new generation to the amazing world of #JUMANJI. *(for the record we are NOT making a reboot, but rather a continuation of the awesome JUMANJI story),” he said in an Instagram post this weekend.

The late Robin Williams starred in a 1995 “Jumanji” film. Three months ago, Johnson clarified that the film will “honor” Williams. Johnson also reminisced about a time he met Williams backstage at an event.

The new “Jumanji” film will be directed by Jake Kasdan and is set to begin shooting this summer.

In the Instagram post, The Rock also thanked his “Fast 8” cast members after wrapping shooting for the upcoming eighth installment of the “Fast and Furious” franchise.

Finished strong and on to the next. That's an officially wrap on #FastAndFurious8. Thank you to our director @fgarygray for the vision and execution. Thank you UNIVERSAL for being tremendous partners as always, thank you to all my fellow co-stars for the daily effort and grind. Scott Eastwood you handsome sumbitch! Natalie Emmanuel I have a cold Budweiser ready for you and Tyrese Gibson you still have the biggest smile and forehead I've ever seen.???? And a huge THANK YOU to our hard working production crew – the backbone of our business. Your kind words meant a lot to me last night – thank you! In the end, we all rallied, as great teams do, kicked ass and will deliver an amazing movie to the world. Proud of our entire FAST FAMILY. And now in two weeks I'll reunite with ol' friends Kevin Hart & Jack Black and we have the honor to introduce a whole new generation to the amazing world of #JUMANJI. *(for the record we are NOT making a reboot, but rather a continuation of the awesome JUMANJI story). It's also crazy to me how much me, Kev and Jack look like triplets when we're together. ????????????????????????. Man this is gonna be FUN. #WheelsUp #ThatsAWrap #FromFastAndFurious #StraightIntoJumanji #BigBrownBaldTattooedMan #DarkChocolateComedicRockStar #BrillaintCrazyCurvyCaucasion #TheseHashtagsAreRidiculous #INeedSleepAndCARBS #ButIWillSettleForTequila