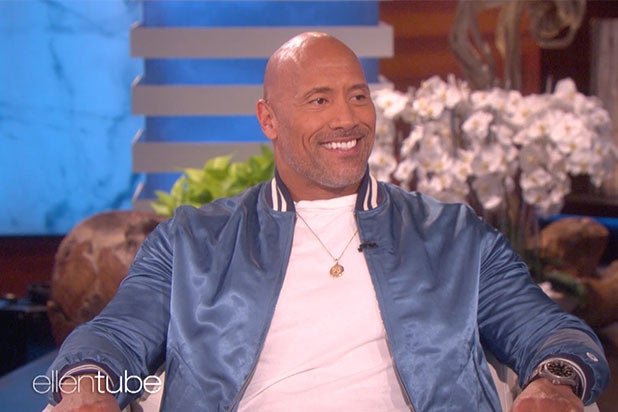 Dwayne Johnson says he wants to marry Frances McDormand after she made the sweetest gesture to his 16-year-old daughter at this year’s Golden Globes.

“I’ll never forget this,” Johnson said on Tuesday’s episode of “The Ellen DeGeneres Show.” “Frances McDormand, she wins a Golden Globe. She goes up there and — I love Frances, as we all do — she goes up and right before she speaks, she turns around and walks to the back of the stage and shakes Simone’s hand out of the blue. It just blew me away. No one did that, and she just had the awareness to do that to my 16-year-old daughter. She gave her speech, and as she’s walking off, Frances grabs Simone’s hand. She has the Globe in this hand and Simone’s hand in this hand and she kisses Simone’s hand. And I was so blown away by that gesture.”

He added, “It was so beautiful of her, and I’ve been meaning, by the way, to call her and tell her, but now that I’m here, I’ve got to tell you, Ellen, I’ve got a little crush on Frances.”

Simone Johnson served as the Golden Globe Ambassador this year. Johnson fully plans to marry McDormand, he says, and that his long-time girlfriend Lauren Hashian is “down with it.”

“Frances, we’re gonna have to exchange numbers because just between you and I – I know nobody else is watching – we’re getting married,” he said. “It’s not gonna be weird. Lauren’s down with it.”

Johnson next stars in “Rampage,” which will hit theaters on April 13. He is also expecting another baby girl with Hashian, and during his appearance on “Ellen” revealed that his 2-year-old daughter Jasmine isn’t too happy about it.

See Video: 'Rampage': Dwayne Johnson Is Back to Save the World in New Trailer

“She was happy. This whole time, you know, you want to prep that they’re going to have their first sibling. ‘OK, gotta get ready for your little sister! Where’s your little sister?’ Every day she points to mommy’s belly, ‘There’s my little sister!'” he said. “Out of the blue, about a week and a half ago, we’re eating breakfast… she looks up and goes, ‘I don’t want a baby sister!’ Firm, just direct eye contact, and that was it.”