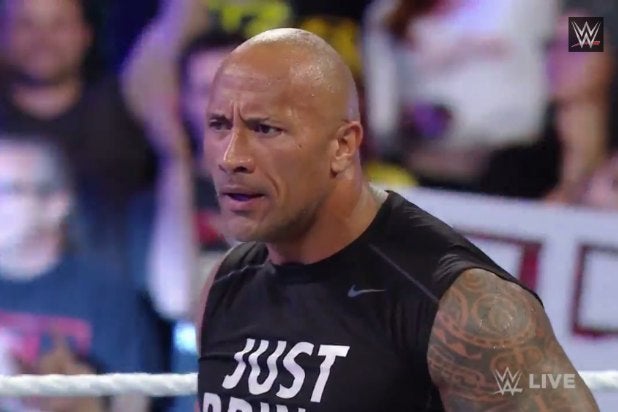 After WWE’s “Monday Night Raw” went off the air, the crowd at the Staples Center in Los Angeles got a surprise visit from The Rock, who decided to give fans a chance to say “hi” to former wrestler, UFC fighter CM Punk.

The man known outside the ring as Dwayne Johnson was there to film in-ring scenes for the wrestling movie “Fighting With My Family,” which tells the story of WWE wrestler Paige and how she grew up in a family of pro wrestlers. The film crew was there to film the final scene of the movie, which depicts Paige’s debut match in WWE against former champion AJ Lee.

Since Lee is CM Punk’s wife, the crowd decided to jokingly chant Punk’s name to mess around with the film crew. The Rock responded by announcing he was going to call Punk right in the middle of the ring. Unfortunately for the crowd, the call went to voicemail. Punk later explained why he wasn’t around to pick up the phone: he was walking his dog.

CM Punk left WWE on bad terms back in 2014, later criticizing the company in a tell-all podcast interview. Since leaving WWE, he has signed on with Marvel Comics to write a series around “Guardians of the Galaxy” member Drax the Destroyer. Last year, Punk made his debut as a mixed martial artist in UFC, losing to Mickey Gall.

Though the relationship between Punk and WWE remains distant, Punk thanked the fans in L.A. for the message they left on his phone.

Thanks Los Angeles. Nice to hear from you. @STAPLESCenter