ABC gave us more of Cheryl Burke and Cody Rigsby on this week’s “Dancing With the Stars” than we’d dreamed possible, after the two were benched last Monday to quarantine following her positive COVID-19 test — and his own positive test four days later.

But the show managed to go on with Cheryl and Cody — who are both fully vaccinated — included during last night’s “Britney Night.” “DWTS” pulled off the performance by having pro dancer Burke and Peloton star Rigsby competing remotely from their respective homes on a split screen.

The quarantined “DWTS” team did a jazz combo to Britney Spears’ “Gimme More” and received a 18/30 score for their separate-but-together, out-of-the-ballroom effort. Appearing over video chat once their virtual partner dance was over, they told “DWTS” host Tyra Banks and the judges how excited they were to be able to keep competing under the guidance of doctors. 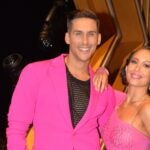 Watch the video of Burke and Rigsby’s “Britney Night” performance and scoring above.

Last night’s “DWTS” marked the second week Burke and Rigsby had to sit out the traditional format of the competition, following Burke’s positive COVID-19 test on Sept. 26. But they still managed to pull a 24/40 score for that episode without entering the ballroom. Here’s how:

With Burke and Rigsby (who was exposed to her during their rehearsal the week before) out of the live show at the last minute and put into quarantine in their respective homes, ABC pivoted to still include them in Week 2, which marked the first elimination show of the season. The partners were judged based on their rehearsal for that week’s salsa dance set to Camila Cabello’s “Don’t Go Yet,” which was taped in New York prior to Burke’s diagnosis.

It was already expected that Burke would have to sit out this week’s “DWTS” to meet the full 10-day quarantine recommended by the CDC when she got her initial positive test ahead of last Monday’s show, but at that time it was unknown how Rigsby would be able to compete without her, while also in quarantine himself due to their contact. A few days later, he received a positive COVID-19 test and ABC kept the plan for how the duo would be competing under wraps until last night’s show.