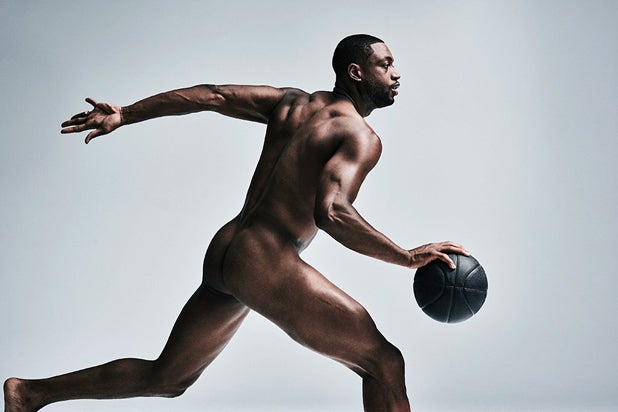 The eighth time proved the charm for Wade (above) who had turned down posing nude for the magazine seven years in a row. “It was uncharted water for me,” the 13-year NBA veteran told ESPN. “It was one of those moments where it’s good to overcome a fear of something.

“It’s bigger than me showing my body off. That’s not as important to me as telling a story of overcoming a fear. It hopefully gives someone confidence to really be their authentic self.”

Wilfork, who weighs in at 325 pounds, said: “I know I don’t have the six-packs and the eight-packs and all that … but I’m perfectly fine with what I am. If people can look at me, look at a guy that’s 325-plus doing an issue like this, I’m pretty sure that they might have a little confidence after seeing that it’s OK to be who you are.”

Retired diver Louganis, 56, is this year’s oldest athlete — but getting naked for the cameras didn’t worry the LGBT rights activist.

“When I look around at my contemporaries, I’d say I’m probably in better shape than most of them,” Louganis told ESPN. “It’s all about making healthy choices. I think HIV has helped motivate me mentally and physically. I look at working out and doing something physically active every day as being as important as taking my meds.

The Body Issue will be available online on July 6 and on newsstands July 8.

See the full roster of 10 men and nine women below.

It's official. These athletes (and more!) will bare all in the 2016 #BodyIssue. Full roster: https://t.co/AwXYt9PTpnhttps://t.co/PWcjoGLGPM