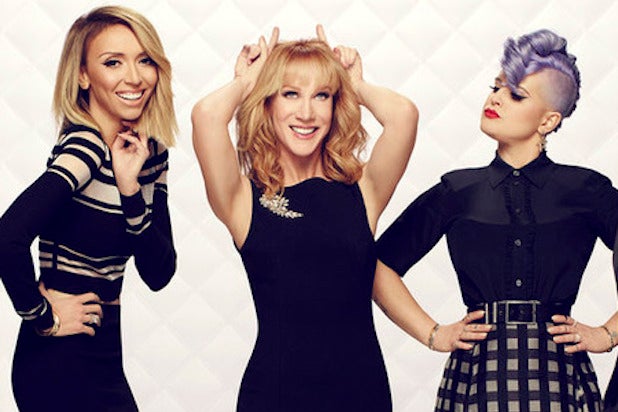 “E!’s comedy series ‘Fashion Police’ is going on hiatus and will return in September. We look forward to taking this opportunity to refresh the show before the next awards season.  Our talented co-hosts Giuliana Rancic and Brad Goreski, along with Executive Producer Melissa Rivers, will continue their roles as we evolve the show into its next chapter for the legions of “Fashion Police” fans around the world,” the network said in a statement.

‘s abrupt exit on Thursday was the latest in a series of blows to hit the show — which never quite found its footing after the death of its original host Joan Rivers.

While the style program  has historically attracted ad revenue and brand placement opportunities, those are drying up increasingly since the Jan. 12 relaunch with Griffin in the spot vacated by Rivers, a network insider told TheWrap.

“They are really worried,” said the individual. “‘Fashion Police’ was a big workhorse for advertisers with tons of brand integration all year long back in Joan’s day. That’s one of the reasons they kept the show around… they sold it at the upfront [presentation]. But with all the bad press and the realization it doesn’t work without Joan… they are thinking about canceling it quietly.”

Aside from the above statement, representatives for E! have not yet returned TheWrap’s request for comment. Kathy Griffin declined a request to interview for this piece.

Before announcing the show’s hiatus, the network was mulling a plan to scrap the show “after the March 30 broadcast and then bring back something different — like the ‘E! Style Collective’ as a series that they can sell in this year’s upfront tied to ‘day after’ red carpets.”

Fashion content is a problem across the network, despite being part of the Comcast channel’s DNA.

“‘The Fabulist’ was cancelled,” the insider said of the defunct 2014 trend series hosted by Kristin Cavallari, “‘Who Wore It Better’ is tanking. So they are having issues with fashion as a category on E!”

To say nothing of the very public dissolution of “Fashion Police” currently playing out in the press. Griffin’s days post-resignation have been stacked with chatter about what she was promised, how the network failed her, and how she should never have accepted the position.

“It is just like when Chelsea [Handler] kept saying bad things about them. It’s killing them and their brand right now… E! [publicity] doesn’t have the upper hand,” the insider said.

“I just don’t think that it’s really what I do. I think that Joan was the master of the one-liners and the zingers,” Griffin said in an interview with Howard Stern on Monday. “I probably shouldn’t have taken the gig.”

On the same day, Griffin told the women of “The View” that “I was told that they would happily, like, sign on to my style… but it’s kind of like buying a house: You don’t really know until you spend the first night there.”

Speaking of first impressions: TheWrap reported in November that E! and Griffin were plaids and stripes from the start.

“They did some focus group testing on ,” an individual within E! told TheWrap at the time. “The problem viewers mentioned is she’d always be compared to Joan, but never actually as good as her.” E! denied this at the time.

Griffin wound up at the head of the panel come January, be it for lack of a better Rivers successor or pressure to have cast in place for the approaching award season. And  approach it did  — where an Oscar edition of “Fashion Police” would proceed to dismantle the fragile relaunch.

A comment from panel member and “E! News” host Giuliana Rancic, about actress Zendaya Coleman’s dreadlocks at the Academy Awards would cause a social media uproar — labelling Rancic a racist while her longtime network abandoned her in the fallout.

In early March, individuals close to Rancic told TheWrap they were disappointed over the network’s handling of the events, that they hadn’t admitted its role in the debacle nor defended the TV personality. Rancic wound up issuing an on-air apology for the comments.

Not only did the individuals say the Zendaya comment was written for Rancic, but “Fashion Police” producers edited out footage that would’ve given more context to the remarks, and possibly could’ve saved her from being characterized as a racist. E! had no comment at the time.

Co-host Kelly Osbourne left the show in late February. She cited the desire to explore other opportunities, but made the decision after voicing her anger over Rancic’s comments. Since then, Griffin has said that Osbourne had always seemed unhappy about the show after Rivers’ death.