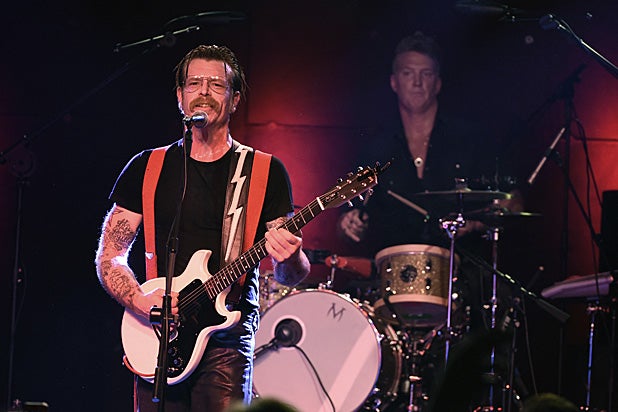 Eagles of Death Metal frontman Jesse Hughes thinks that “everybody has to have” guns after gunmen opened fire during their concert at the Bataclan theatre in Paris on Nov. 13.

When asked whether his gun control views had changed since the attacks, the member of the National Rifle Association said, “Did your French gun control stop a single f–king person from dying at the Bataclan? And if anyone can answer yes, I’d like to hear it, because I don’t think so.”

“I think the only thing that stopped it was some of the bravest men that I’ve ever seen in my life charging head-first into the face of death with their firearms,” he continued during an interview on French television station iTele.

Speaking to the French television station iTele on Monday, he added, “I know people will disagree with me, but it just seems like God made men and women, and that night guns made them equal. And I hate it that it’s that way. I think the only way that my mind has been changed is that maybe that until nobody has guns everybody has to have them.”

The Eagles of Death Metal are set to perform at Paris’ Olympia concert hall on Tuesday, just three months after terrorists entered Bataclan and opened fire on a crowd of nearly 1,200, killing at least 89.

The members of the band managed to escape.  Soon after the massacre, Hughes didn’t believe he could ever get back on stage again, however a phone call from Bono helped him find the strength. “He just prayed with me on the phone. He kept my head off of things,” the rocker said.

And perform again they did  — on U2’s stage during their mega-concert in Paris at the Accorhotels Arena in December.