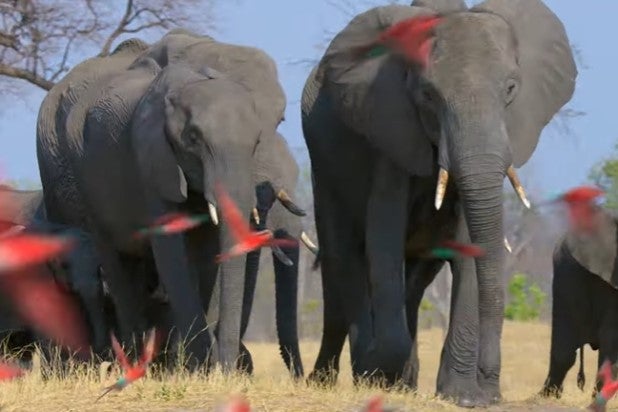 April 22, 2020 marks the 50th anniversary of Earth Day, and as the global community comes together to fight the ongoing coronavirus pandemic, the event serves as a reminder that we’re all living on this planet together.

The Disney streaming service has a slew of options, including the Disneynature Meghan Markel-narrated documentary “Elephant” and Natalie Portman’s “Dolphin Reef.”

There’s also conservation-minded feature films including “Avatar,” “Bambi” and “Pocahontas” — something for everyone in the family.

Earth Day also coincides with National Parks Week, and National Geographic has its eight-part “America’s National Parks” series, which highlights sites like The Grand Canyon and Yellowstone — places we’d definitely want to visit instead of sheltering at home. National Geographic also has over a dozen documentaries, including the premiere of Jane Goodall’s “The Hope.”

Hulu has its own Goodall documentary — 2017’s “Jane” — streaming. We also recommend “March of the Penguins 2: The Next Step” and “Zoo,” which takes a look behind-the-scenes look at the residents of the Bronx Zoo.

“H2O, The Molecule That Made Us”

The Earth is some 72% water, and this new documentary explores its most precious resource — water. “H2O, The Molecule That Made Us” is a special three-part broadcast and digital series premiering this Wednesday on PBS and airing for three consecutive Wednesdays. The series will also be available to stream on PBS here.

“Here We Are: Notes for Living on Planet Earth”

This captivating animated film, based on the No. 1 New York Times Bestseller and 2017’s No. 1 TIME Best Book of the Year, is airing on AppleTV+. It follows a precocious 7-year-old (Jacob Tremblay) who, over the course of Earth Day, learns about the wonders of the planet from his parents (Chris O’Dowd and Ruth Negga) — and from a mysterious exhibit at the aptly titled Museum of Everything. “Here We Are: Notes for Living on Planet Earth” is narrated by Meryl Streep. Check out a preview above.

“The Great Global Clean Up”

Actor Zac Efron and TikTok star Zach King will be joined by celebrities including Lil Dicky, Liza Koshy, and Cody Simpson to talk about the efforts being made to clean up our planet. The Discovery special will travel to different locations around the world, including a beach cleanup in Efron’s hometown in California. Efron will also interview Denis Hayes, who founded Earth Day in 1970.

Discovery will also be airing encores of “Racing Extinction” and its gorgeous nature series “Serengeti.” Check out the network’s full slate of Earth Day programming here.

“Last Call for the Bayou”

Each year 25-square miles of Lousiana’s wetlands are lost forever, displacing its marine life, damaging local oil and gas industries and threatening the citizens of New Orleans. “Last Call for the Bayou” follows the lives of those experiencing these catastrophic changes first-hand to discover the difficulties of life on the bayou and capture a way of life on the brink of collapse. You can stream on Smithsonian Channel here.

“Planet of the Humans”

This Michael Moore-produced documentary, which you can watch in its entirety above, takes a critical look at the current state of the green energy movement. You can read our review here.

Beginning Wednesday, a generation of young people will come together online for Earth Day Live, a three-day live stream mobilizing millions around climate action. The livestream will raise money for COVID-19 relief efforts.

10 Movies With Social Distancing to Watch While You're in Isolation, From 'Home Alone' to 'The Martian' (Photos)

Welcome to self isolation. As a lot of Americans find themselves stuck inside (for who knows how many days) attempting to slow the spread of the novel coronavirus, you might find yourself going a little stir crazy. Running out of things to stream on Netflix? Trying to avoid eating all the quarantine snacks? Here's a list of 10 movies to keep you busy while tapping into that feeling of isolation.