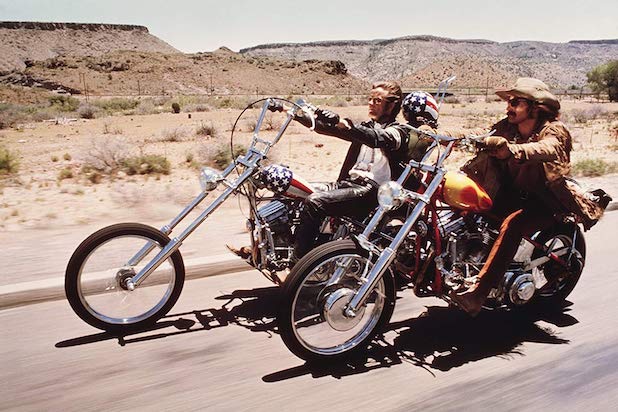 Hopper’s “Easy Rider” returns to the festival after being nominated for the Palme d’Or in 1969 and winning Hopper a prize for Best First Work.

The lineup also includes a special midnight screening of “The Shining” as presented by Alfonso Cuarón, the 25th anniversary of the cult film “La Cité de la peur,” a spotlight on three films from Spanish and Mexican surrealist Luis Buñuel, the attendance of director Lina Wertmüller, a look back at the 1951 Palme d’Or winner “Miracle in Milan” from Italian director Vittorio De Sica, a tribute to the late Milos Forman, and a screening of the first ever Japanese animated film shown in color.

Finally, the World Cinema Project and the Film Foundation of Martin Scorsese are presenting a collection of films and documentaries from around the world that are being restored in a section dedicated to heritage cinema.

The majority of the films will be screened at Buñuel Theater, Salle du 60e or at the Cinéma de la Plage, and are all presented by either their directors, artists or restoration managers.

The 4K restoration by Sony Pictures Entertainment of “Easy Rider” was restored from the original 35mm negative, and the film’s star Peter Fonda will be on hand to celebrate the film’s 50th anniversary.

Stanley Kubrick’s “The Shining” was also remastered in 4K from the original 35mm camera negative and will be presented by Cuarón.

“La Cité de la peur, une comédie familiale” is a 1994 French film by Alain Berbérian and features the cult comedy of the French comic group Les Nuls. Alain Chabat, Chantal Lauby and Dominique Farrugia will be in attendance for the film’s 25th anniversary.

Buñuel’s “Los Olvidados,” “Nazarín” and “L’Âge d’or” will be screened as part of the spotlight on the director, and all three films have been restored.

Cannes Classics will also pay tribute to Lina Wertmüller, the first woman ever nominated for Best Director at the Oscars. Her film “Pasqualino Settebellezze” (“Seven Beauties”) screen at the festival, and Wertmüller will introduce the film with lead actor Giancarlo Giannini in attendance.

Finally, two films will be screened in tribute to director Milos Forman, who passed away last year. His “Loves of a Blonde” and the documentary “Forman vs. Forman” will be shown.

The 72nd Cannes Film Festival begins May 14. Below is a list of all the films restored as part of Cannes Classics 2019. For more information on the complete lineup, click here.