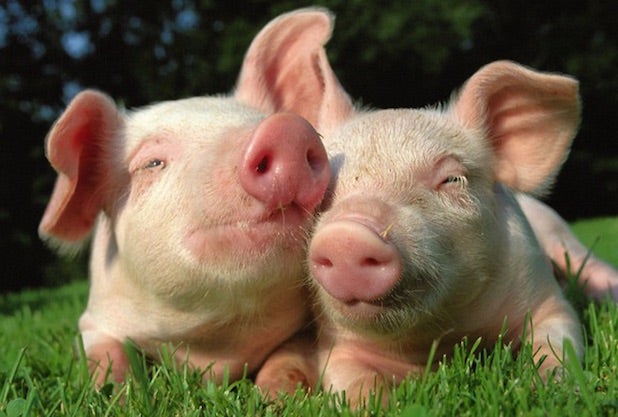 “Eating Animals” is not a preachy, militant vegan documentary, but rather an affectionate and thoughtful examination of traditions that helped build this country in the early days: actual farms with actual farmers raising livestock naturally, rather than pumping antibiotic after antibiotic into our food production system as we barrel toward superbugs we can’t control.

Produced and narrated by notable vegan Natalie Portman and directed by Christopher Dillon Quinn from novelist Jonathan Safran Foer’s memoir, “Eating Animals” may be the most important documentary that screened this year at the Telluride Film Festival, though it could be hard to get audiences across America to watch it.

Why? Because most people don’t want to know where their food comes from. We block out the details of the process because we just don’t have any more room in our lives to worry. As a result, billions of animals take that bottom rung because we’re all so busy just trying to get through our own lives.

While “Eating Animals” paints a bleak picture of the damage that factory farming does to poor neighborhoods, water sources and our climate, it stops short of advocating unrealistic demands to end meat consumption. Rather it argues for sensible and attainable standards for more compassionate and healthier meat production by making concerns for animal welfare a top priority.

Several of the featured farmers went through their own personal transformations once they saw how animals were treated, including a chicken farmer who saw that Purdue lied to the public about its treatment of animals. It’s typical for agribusiness to fudge the facts and tell the public what they want to hear, because they know if consumers had any inkling about what goes on behind the gates many would literally lose their appetite. But the only way we can change our attitude is to know the truth.

There’s a whistleblower in “Eating Animals” who wrote an article for the New York Times in 2015 about the harsh treatment of pigs. For this essential inquiry he was investigated by the FBI, and the consequences of his activism took a harsh toll on his life. His story illustrates that it isn’t easy facing down the uglier aspects of America’s food chain, but it is, perhaps, long past time to start.

“Eating Animals” makes an effort to avoid pointing fingers at consumers. After all, it acknowledges that meat consumption has been a reality of human life for many millennia. But the film makes a damning case, in the plainest of terms, that enormous agricultural conglomerates are the villain. Corporate livestock production is inhumane, a virtual holocaust on animals and, if left unchecked, it has the potential to eventually lead to our own demise.

To encourage incremental changes that meat-eaters can accept, “Eating Animals” makes the case that if you build better alternatives, people will come. Conscientious consumers have shown a willingness to buy meat from farmers who raise their livestock responsibly, not in confined spaces, not with antibiotics. As well they should. Beef, pork and poultry produced in more humane conditions is healthier and more nutritious. Better meat alternatives, like Beyond Meat, will taste better and better as time goes on, and a burgeoning market will bring costs down.

It’s a realistically imaginable future and this essential documentary lights the way.

What a lot of moviegoers will want to know, though, is how hard is it to watch “Eating Animals”? Well, anyone who’s taken a moment to think about where our meat comes from can probably already imagine what goes on. The film necessarily shows some grim and gory scenes captured by spies and whistleblowers — how else can the impact be felt? So yes, if you’re ready to be concerned, prepare to be shown why you need to be.

As an overly sensitive type who can barely endure Facebook’s daily onslaught of animal abuse and torture stories, I wondered if I could make it through this film. In fact, what I saw made me cry, but I wanted to see because it’s important to me. If we want to eat meat, watching “Eating Animals” to understand its full cost is the least we can do.