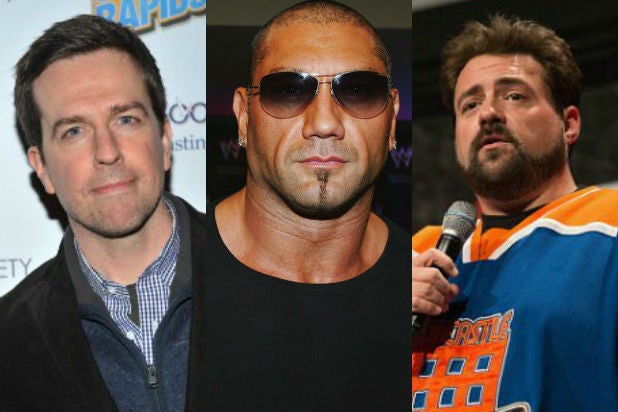 A slew of content is coming from comedian Ed Helms and “Guardians of the Galaxy” star Dave Bautista, along with a new adventure for Kevin Smith’s Jay and Silent Bob — but save your popcorn money, it’s all for virtual reality.

Set to hit in mid-2018, the projects include a workplace comedy that lets the user became the greatest wizard of all time and a hostage negotiation that unfolds live in front of users.

Read the full slate below:

Original short-form live-action comedy series from director and producer Ed Helms (The Hangover, The Office). Written by Frank Lesser (The Colbert Report), NEW TRICKS follows an aimless 30 year-old Radio Shack employee who receives a visit from a magical elf one day and learns he is destined to become the world’s greatest wizard. Helms will produce the series with Mike Falbo (Pacific Electric Picture Co.).

STX will expand its relationship with actor Dave Bautista (Guardians of the Galaxy, Blade Runner: 2049) through an original short-form action-comedy series. STXfilms is concurrently collaborating with Bautista on an action comedy feature film, which is also in the early stages of development.

A spinoff of STX’s MILE 22 film franchise, THE KIEV EXCHANGE is a short-form, live-action series from MILE 22 director Peter Berg. Written by Umair Aleem (Extraction, 2017 Blacklist for “Kate”), THE KIEV EXCHANGE is a gritty, pulse-pounding action-thriller following the CIA’s elusive paramilitary force, Ground Branch, as they negotiate a tense and complex hostage exchange in a public square. When all hell breaks loose they must come together to fight their way out of an ambush. Berg will produce for Film 44 and Film 45, along with Mark Wahlberg, Matt Goldberg and John Logan Pierson.

Original short-form, live-action comedy series from Kevin Smith (Clerks, Mallrats, Chasing Amy). Smith will write, direct and produce the series, which stars his longtime collaborator Jason Mewes (Clerks, Mallrats, Chasing Amy) as they revisit fan-favorite characters Jay and Silent Bob. Shot entirely from the perspective of Bob, viewers will embody the silent fanboy himself while alpha-slacker Jay leads the way through a string of idiotic adventures.

From writer Derek Kolstad (The John Wick Trilogy), this original live-action short-form series, set in 1947, follows a mysterious government agent sent to investigate an aircraft crash in rural New Mexico. As he probes deeper, it becomes clear this is no ordinary incident. Kolstad is also writing STXfilms’ upcoming action-thriller Nobody starring Bob Odenkirk.