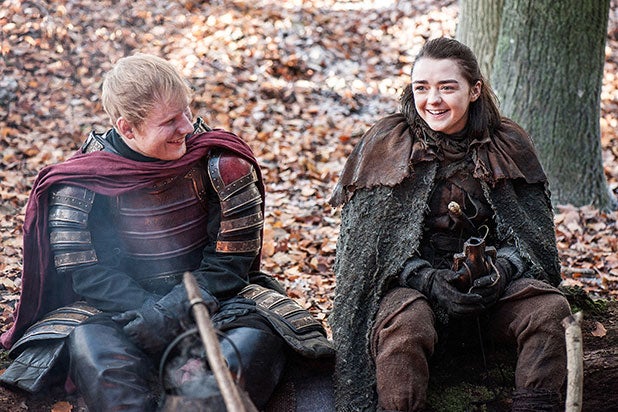 Popstar Ed Sheeran made quite the splash (for better or worse) when he appeared in a cameo in the “Game of Thrones” Season 7 premiere. However, he said there won’t be a sequel.

“No one wants to see me come back,” he told MTV News. “I wanted to be a cameo in it, and I’ve done the cameo.”

Sheeran appeared as an unnamed Lannister soldier who sang a song while the group huddled around a campfire. Arya Stark (Maisie Williams), who just left the Twins after taking out the entire Frey family, stops to share a meal with them. At first, the tension is high, considering Arya’s feelings about the Lannisters, but the scene ultimately ends in a laugh.

It’s unclear what Sheeran and his band of merry men’s trajectory was following the meeting with Arya in the woods, but because of the Lannister wars with just about everybody, we can assume that they somehow made it back to King’s Landing. Sheeran theorizes that they were a part of the loot train attack, where Daenerys surprised Jamie and his army with her Dothraki soldiers and her largest dragon.

“We were all quite young, those soldiers,” Sheeran said. “I doubt I’m going to survive for that long, to be honest, when there are dragons in the world.”

Considering how many people got roasted during that scene, he’s probably right.

The cameo was polarizing for fans. Some thought Sheeran broke their immersion of the scene while others thought it was fine. It was mostly there as a gift for Williams anyway, who is a big Sheeran fan.

“They basically put me in a scene with her to kind of be like, ‘Hey, thanks for doing the show for so many years. Ed’s going to be in it,” he continued.

And because Sheeran is a big fan of “Game of Thrones,” he was happy to do so.