The Film Independent Spirit Awards have selected a host for their 25th awards show, and the qualities they’ve opted for are "tangential, absurd, bizarre, and surreal."

That’s the way Film Independent described Eddie Izzard in the press release announcing that the British comic and actor has been selected to host the show, which is moving to Friday night, March 5, from its traditional spot the Saturday afternoon before the Academy Awards. It will air live and uncut on IFC. 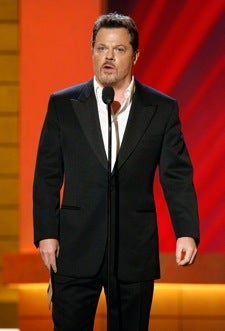 LOS ANGELES (January 25, 2009) – Film Independent, the non-profit arts organization that produces the Spirit Awards and the Los Angeles Film Festival, is pleased to announce that acclaimed comedian Eddie Izzard will serve as Master of Ceremonies for the 25th Film Independent Spirit Awards. Izzard’s tangential, absurd, bizarre, and surreal comic narratives are lauded for their creativity and wit, which suits the irreverent, laid-back style of the Spirit Awards. The milestone anniversary will be a late-night celebration on Friday, March 5, 2010 at LA Live’s event deck in downtown Los Angeles.

“The Spirit Awards are known for celebrating filmmakers who can challenge audiences with their original storytelling and art, and the same applies to Eddie,” said Film Independent Executive Director Dawn Hudson. “We are thrilled to have such a talented and daring performer host the 25th Anniversary for us. There’s a wealth of memorable moments from past shows and independent film history to draw from, so audiences are in for a treat!”

“Eddie Izzard will bring his hilarious energy to this year’s ceremony, while paying tribute to the independent spirit and artists who have produced some of the world’s best original films,” said Jennifer Caserta, EVP and GM of IFC. “The Spirit Awards are the pinnacle celebration of independent work in the film industry, and we are proud to have been a dedicated partner and television broadcast home for the awards for more than fifteen years.”

Already one of the most acclaimed comics of his generation, Eddie Izzard is developing an equally stellar reputation as a film, television and stage actor. Izzard is completing his “Stripped Too” arena tour across the U.S., the UK and Europe including a recent sold-out show at Madison Square Garden. In April 2008, he embarked on the largest comedy tour of his career with “STRIPPED,” which indisputably became the hottest selling comedy ticket of 2008 on both sides of the Atlantic.

Izzard will next be seen in the independent film, Every Day opposite Liev Schreiber, Helen Hunt and Carla Cugino, and Believe: The Eddie Izzard Story, a documentary on his rise to fame – from his early influences to now – which was released last fall and will air on EPIX this spring. His recent film roles include Valkyrie, Ocean’s Thirteen, Across the Universe, Romance and Cigarettes, Blueberry, Five Children and It, The Cat’s Meow, and the animated films Bee Movie, and Igor. His big-screen debut was alongside Bob Hoskins and Robin Williams in the 1996 movie Secret Agent. On television, Izzard last starred in the critically acclaimed FX Network Show "The Riches," opposite Minnie Driver. Izzard also served as a producer.

His comedic musings have earned him some top awards from Time Out and the Perrier Panel. “Live at the Ambassadors” received an Olivier Award nomination for Outstanding Achievement. He won the British Comedy Award for Top Stand-Up Comedian in 1993 and 1996, and “Dress to Kill” earned him a New York Drama Desk Award and two Emmys®.

Izzard’s stage appearances include David Mamet’s “The Cryptogram”; the title role in Marlowe’s “Edward II”; “900 Oneonta”; and “A Day in the Death of Joe Egg” in London and on Broadway, which won him a handful of awards, including a Tony nomination for Best Actor. Since his first stage appearance on London’s West End in 1993 in the one-man show “Live at the Ambassadors,” Izzard has inhabited a unique world of his own "carefully crafted rubbish." “Live at the Ambassadors” was followed by a succession of critically-acclaimed shows including "Unrepeatable" in 1994, 1996’s "Definite Article," "Glorious" in 1997, "Dress to Kill" in 1998, and the 2000 production "Circle."

Izzard recently ran 1,100 miles through England, Wales, North Ireland and Scotland for charity. He raised $250,000 for Sports Relief, which helps the less fortunate in Britain and poor countries worldwide.

ABOUT THE FILM INDEPENDENT SPIRIT AWARDS

For more information on submission guidelines, voting, photo and video galleries, and the history of the Spirit Awards, please visit SpiritAwards.com.

Film Independent is a 501 (c)(3) non-profit arts organization that champions independent film and supports a community of artists who embody diversity, innovation, and uniqueness of vision. Film Independent helps filmmakers make their movies, builds an audience for their projects, and works to diversify the film industry. Film Independent’s Board of Directors, filmmakers, staff, and constituents, are comprised of an inclusive community of individuals across ability, age, ethnicity, gender, race, and sexual orientation. Anyone passionate about film can become a member, whether you are a filmmaker, industry leader, or a film lover.
With over 250 annual screenings and events, Film Independent provides access to a network of like-minded artists who are driving creativity in the film industry. Film Independent offers free Filmmaker Labs for selected writers, directors, and producers; provides cut-rate services for filmmakers; and presents year-round networking opportunities. Film Independent’s mentorship and job placement program, Project:Involve, pairs emerging culturally diverse filmmakers with film industry professionals.

Film Independent produces the Los Angeles Film Festival, celebrating the best of American and international cinema and the Spirit Awards, a celebration honoring films and filmmakers that embody independence and originality.

For more information or to become a member, visit FilmIndependent.org.