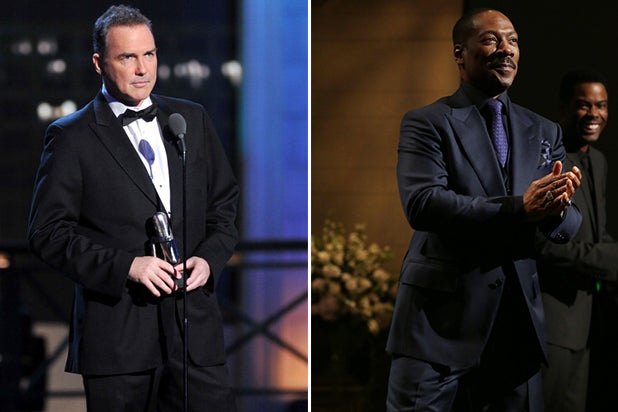 Watching “Saturday Night Live’s” 40th anniversary extravaganza, you’d never know there was so much drama going on behind the comedy scenes.

On Wednesday, comedian Norm Macdonald took to Twitter and, for two hours, spilled the beans on exactly what happened that night (and the ones leading up to it) — especially as it related to fellow alum Eddie Murphy.

According to Macdonald, Murphy had entertained the idea of playing Bill Cosby in the special’s super-sized “Celebrity Jeopardy!” skit — one that Macdonald co-wrote specifically for “SNL 40.”

However, Murphy changed his mind the day before the show because, because according to Macdonald, the “Nutty Professor” star felt “uncomfortable.”

According to Macdonald, Murphy had some misgivings about impersonating Cosby, who’s been the subject of numerous sexual assault allegations in recent months.

Also Read: Jimmy Fallon and Seth Meyers Make the ‘SNL 40′ After-Party Sound Like the Best Concert of All Time

“He knew the laughs would bring the house down,” Macdonald said of Murphy. But, he added, Murphy decided “the laughs are not worth it. He will not kick a man when he is down.”

Murphy has been absent from the iconic sketch comedy show for more than 30 years, a time-gap widened when David Spade made fun of him during one of his “Weekend Update” cameos.

“Look children, a falling star,” said Spade at the time, as Murphy’s picture popped up on the screen.

According to Macdonald, Murphy took offense, refusing to come on the show ever since.

“David is a very kind man,” Macdonald said, “but his remark was not.”

Murphy did agree to return for last week’s 40th anniversary special, though his appearance was more tame than funny. His short stage time was actually considered awkward by many TV critics and media outlets.

After a heartfelt introduction from comedian Chris Rock, Murphy said his “SNL” return was like “going back to my old high school, kind of.” That was his only attempt at humor.

Macdonald wish it had gone another way, tweeting: “Among many other things, this show was to be the return of Eddie Murphy.”

“The iconic doors would open and on to home base would step Eddie Murphy,” he wrote. “The audience would know what to do.”