Southern California tends to rise above other regions in the festival game because of its majestic beaches and impeccable weather. It also offers unique landscape and vibe that can allow certain things to flourish even if time and seasons dictates otherwise.

In this case, it means having a beachfront festival at the end of September when the weather has started to turn. In particular, the burgeoning Ohana Fest, which has made its home at Doheny State Park in Dana Point, California, for the past four years.

The festival, curated by Pearl Jam singer Eddie Vedder, has slowly and quietly, become one of the best fests not only on the local concert calendar but nationally as well. The event, which draws about 20,000 people for each of its three days, was sold out well in advance on both Saturday (which Vedder himself headlined) and on Sunday, where the Red Hot Chili Peppers performed for a crowd smaller than they usually draw (their set was easily the most cramped the grounds have been in the fest’s history). Each night was sold out well in advance Their rollicking set, which was a mix of fairly recent songs and greatest hits, wasn’t even as chaotic crowd-wise as opposed to a different atmosphere.

In addition to the Chili Peppers, the lineup was cultivated for old Gen Xers. That didn’t stop younger fans from heading to the beach, but instead of battling through folks for a better spot to check out the action, fans were respectful of each another and their space. Vedder himself during his set pointed this out by stating how impressed he was that a young girl could be hanging on the rail without her parents fearing for her safety. 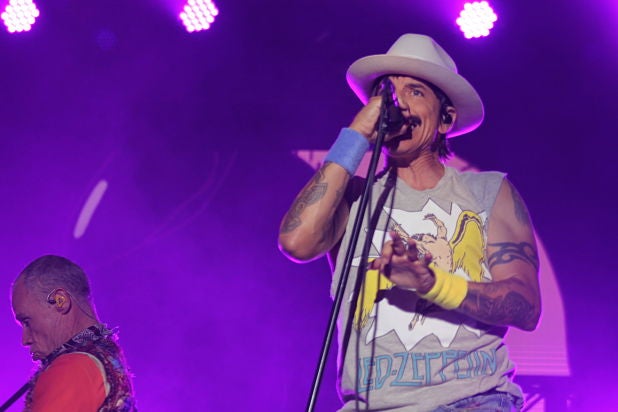 That theme of intimacy and community — or at least Vedder’s interpretation of it — was echoed throughout the weekend. For him, that meant collaborating with longtime pals like the Strokes (who covered the Pearl Jam deep cuts “Hard to Imagine” and  “Juicebox”). They were joined on stage by former Pearl Jam (and Red Hot Chili Peppers) drummer Jack Irons, “Once” Academy Award winner Glen Hansard (who performed Pearl Jam’s “Smile” with Vedder in addition to popping up during the host’s set as well) and even surfing champ/co-festival creator Kelly Slater. There was constant chatter from musicians reiterating environmental issues like climate change (that resonated a bit more due to its geographic footprint) and registering folks to vote.

As for the music beyond Vedder’s set hopping, Laura Jane Grace and the Devouring Mothers tore through their set, while veteran grunge outfit Mudhoney managed to “play angry music for smiling people,” as Vedder astutely pointed out. Jenny Lewis coolly showcased why her latest album is a candidate for album of the year and Nathaniel Rateliff & the Night Sweats’ high-energy set featuring their brand of stomping revivalist blend of folk and soul had the pre-Chili Peppers crowd dancing along.

Though Sunday’s weather was more typical for late September, not even Saturday’s dreary overcast could dull the mood. The intimate setting (there are only a few stages) allowed attendees to roam around and engage with each other and the issues. As if the weather couldn’t speak for itself, storytellers educating attendees on climate change on a side-stage (which was adjacent to a National Geographic photo gallery) while the crowd slurped on Kona beer, an assortment of other drinks or chomping on a burrito or hot dog.

Leaving the venue as a cool breeze gently brushed across your face, it’s easy to get why a nice festival like Ohana works. Tranquil ocean vibes aside, at a time when huge, homogenous festival lineups have turned these into tentpole pop culture events and lessened the spirit of what gives a music festival its own identity. Instead, as Ohana has proven, you don’t need to create a moment or need to feature the biggest names in music right now or have 100,000-plus attendees for a festival to be great. Vedder announced during his set that the fest would return in 2020, which will be the perfect chill anecdote to what will inevitably be a challenging year for the country as a whole.