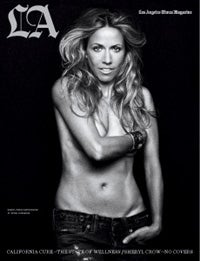 The Los Angeles Times announced today that Annie Gilbar, editor of the paper's retooled Sunday magazine, is out, part of a sweeping reorganization at the paper that will move LA back under the editorial department's umbrella.

Nancie Clare, who served as deputy editor under Gilbar, is in.

"This move now brings all of our newsrooms  together, reporting to [Times editor] Russ Stanton," publisher Eddy Hartenstein wrote in a memo to staffers. "And we're breaking new ground in the process, having created a 24/7 editorial hub that feeds our journalism to a portfolio of products and a broader cross-section of Southern California readers than ever before."

The realignment comes roughly one year after the weekly magazine's reincarnation as the monthly LA, a luxurious, highly-stylized title launched in September 2008, under the auspicies of the business department.

The launch was controversial, and showcased an internal power struggle between the editorial and business ranks at the LA Times. In June 2008, David Hiller, the paper's then-publisher, turned the magazine over from the newsroom to the business side.

Hiller was eventually ousted, but the plan had already been hatched; Gilbar, a former editor at InStyle and one-time host on the Home Shopping Network, was named editor in July.

Gilbar was not mentioned in a news release issued by the Times on Monday.

Through the first three quarters of 2009, the magazine, like most, has struggled to maintain an advertising base. Ad pages for LA fell 6.4 percent, according figures released today by the Publishers Information Bureau.

The New York Times Magazine fared far worse, with its ad pages plummeting more than 43 percent during the first nine months of the year.