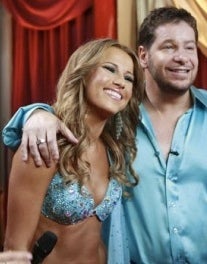 Edyta Sliwinska, the only professional to appear on all 10 seasons of "Dancing With the Stars," has never taken home a mirrorball trophy.

And the way things are looking, she’d have had better luck if she were paired with Pamela Anderson.

This season, Sliwinska’s been stuck with Aiden Turner (above), the impossibly handsome "All My Children" actor who, as we found out on Monday night’s premiere, is also sporting left feet on both of his legs.
Will  Sliwinska ever get a decent partner?
(See our slideshow: Edyta Sliwinska’s Crummy Dance Partners)
The Polish-born beauty, one of the show’s most well-known and popular dancers — her best year as a professional was 2001, when she won the International Grand Ball championship in San Francisco and the Holiday Ball in Las Vegas — has been consistently paired with men whose prospects for winning range from iffy to nil.
She’s been paired with more than her fair share of oldsters (George Hamilton, Vincent Pastore), oversized, washed-up athletes 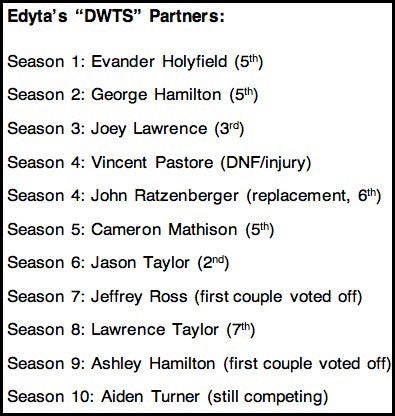 (Evander Holyfield, Lawrence Taylor), no-names (Jeffrey Ross, pictured above left; and Ashley Hamilton) and just plain klutzes (John Ratzenberger, Turner). Her best two shots at the top prize were Joey Lawrence (third, Season 3) and Jason Taylor (runner-up).
This, while her competitors have seen a steady stream of Olympians, professional performers and nimble, elite athletes.
Of the 28 dancers to appear on the show, six have won trophies. Two of those — Cheryl Burke and Julianne Hough — have won twice (Burke with Drew Lachey and Emmitt Smith; Hough with Apolo Anton Ohno and Helio Castroneves).
And Sliwinska is one of three dancers to twice finish last — the others are Alec Mazo, her husband and professional dance partner, and Jonathan Roberts, who has thrice bombed (Monica Seles, Belinda Carlisle, and Macy Gray).
ABC says the dancers are paired with stars based on a number of factors including height and personality — but nothing about whether their odds of winning are a factor. The network also says the dancers are paid on a per-appearance basis, so the incentive — besides the glory of a mirrorball trophy — is essentially to earn another paycheck from one week to the next.
This season, Sliwinska will be lucky to pick up two or three of those.
As long as she’s being paired with marginally dancing soap-opera stars, it’s safe to call her the Susan Lucci of "Dancing With the Stars."
x
Looks like you're enjoying reading