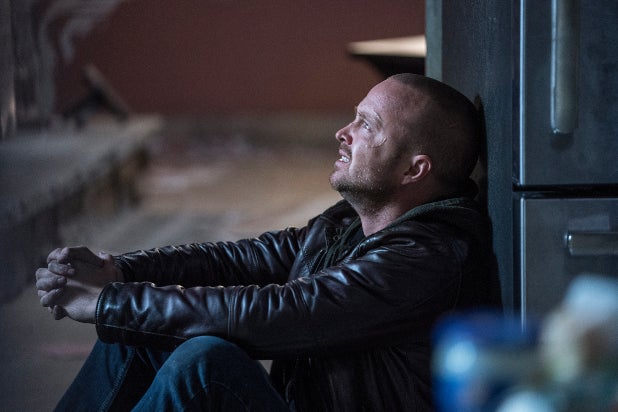 About 36% of the film’s average minute audience over its first three days were younger adults in the ages 18-34 demographic, the largest share among the measured demos. The audience was heavily male, with almost 40% comprised of men 18-49.

“El Camino” was shrouded in mystery in the weeks and months leading up to its release, fueled by “Breaking Bad” creator Vince Gilligan and his desire for intense secrecy surrounding the film. Individuals with knowledge of the production told TheWrap that Gilligan, who is making his directorial debut with “El Camino,” and the film’s producers wanted the film under heavy lock and key, in order to protect any spoilers from getting out. Filming was done in total secrecy in New Mexico, under the fake title “Greenbriar.”

“El Camino” picks up right where “Breaking Bad” left off back in 2013. Walter White (Bryan Cranston) is dead and Jesse Pinkman (Aaron Paul) has finally escaped from captivity. With none of the Nazis left alive, Pinkman is on the run from both his past and the cops. New dangers emerge along the way in Vince Gilligan’s sequel movie, which in addition to its Netflix run also enjoyed a limited theatrical release this past weekend.

Click here to read TheWrap’s coverage of the film, including an interview with Paul.

The former AMC series also saw a huge lift on Netflix in the lead-up to “El Camino’s” release. During the week of the premiere (Oct. 7-13), the average minute audience for “Breaking Bad” episodes was 153,000, more than double what the show averaged over the prior three weeks (62,000).

Below is how “Breaking Bad” performed over each season of its AMC run. Reminder: Season 5 was split into two halves that aired a year apart.