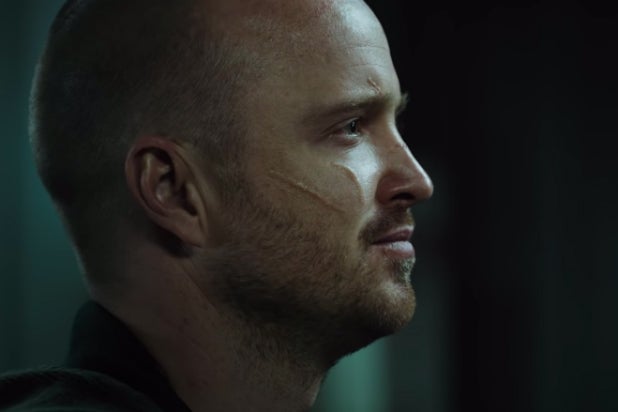 (Warning: This story contains MAJOR spoilers for “El Camino: A Breaking Bad Movie,” so stop reading NOW if you don’t want to find out what happens in the film.)

“El Camino” ends the same way it began: With a flashback featuring a dead “Breaking Bad” character. But that was not always the plan.

Right after Ed (Robert Forster) drops Jesse (Aaron Paul) off in Alaska to start anew, the free former meth cook hands him a “goodbye” letter. Though not privy to its contents, the audience catches a glimpse of the name on the envelope: Brock Cantillo (for a refresher on who that is, go here).

Paul told TheWrap that Vince Gilligan had initially planned to end the film with a voiceover revealing the contents of the letter. “That was the very first thing that Vince wrote when he wrote the script,” Paul explains. “Originally, in the first draft of the script, that’s how the story ended. With Jesse driving through Alaska, and you hear the voiceover of what’s inside of the letter.”

Instead, the final scene of Gilligan’s “Breaking Bad” movie sequel has Jesse driving off to his new life in Alaska, thanks to Ed, the vacuum shop owner/fixer who helps criminals disappear. It then quickly cuts to a flashback scene of Jesse and his old girlfriend, Jane Margolis (Krysten Ritter), as the two of them are driving along an open stretch of road in the New Mexico desert.

Even though Gilligan made a slight change to the ending, Paul was overall pleased with how Jesse’s story panned out. “In my own sort of idea of where he ended up, it was always in Alaska,” he said. “I just always saw him running off to Alaska and living in the mountains, hopefully falling in love and just working with his hands and building things out of wood, keeping his nose clean.”

“El Camino” is now available to stream on Netflix and in theaters for a limited engagement from Oct. 11-13.