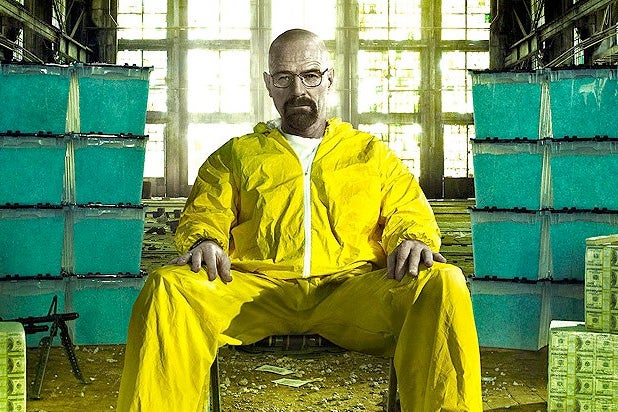 By now you know that Bryan Cranston returned as Walter White in “El Camino,” Vince Gilligan’s follow-up film to “Breaking Bad” that is streaming on Netflix.

And now you can see just how quickly Cranston transformed back into his old “Breaking Bad”alter-ego, courtesy of a time-lapse video posted on Twitter, which you can watch below:

I don’t know why filming takes so long, I became Walter White in less than a minute.

Cranston’s cameo comes towards the end of the film during a flashback scene that reunited him with Aaron Paul.

The scene in question takes place at a diner, and in-universe it is set towards the end of the second season episode “Four Days Out,” which sees Cranston and Pinkman stranded in the middle of the New Mexico desert while the two are cooking a giant batch of methamphetamines. The scene features Walt and Jesse talking about the early days of their meth business, and what might Jesse do with his future when they’ve completed Walt’s mission of ensuring his family’s financial stability.

“I assumed, maybe, Walt would show up in some sort of flashback at a certain point,” Paul told TheWrap, who added it was “incredibly strange” to get to act across from Cranston’s White one more time. “It was easy for me to keep everything a secret. We had to make sure that we weren’t seen in public together.”

“El Camino” was shrouded in mystery in the weeks and months leading up to its release, fueled by “Breaking Bad” creator Vince Gilligan and his desire for intense secrecy surrounding the film. Individuals with knowledge of the production told TheWrap that Gilligan, who is making his directorial debut with “El Camino,” and the film’s producers wanted the film under heavy lock and key, in order to protect any spoilers from getting out. Filming was done in total secrecy in New Mexico, under the fake title “Greenbriar.”

About 36% of the film’s average minute audience over its first three days were younger adults in the ages 18-34 demographic, the largest share among the measured demos. The audience was heavily male, with almost 40% comprised of men 18-49.