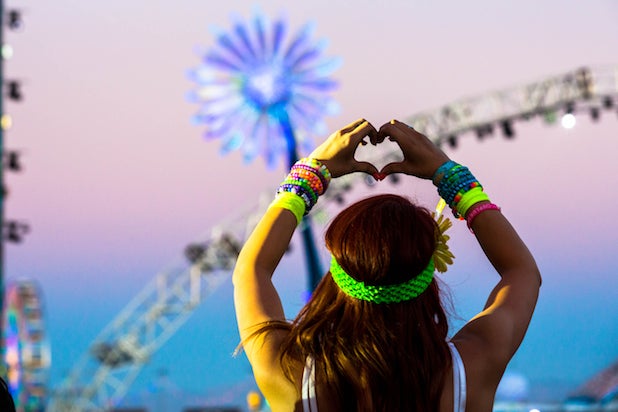 Get ready to party, people! Focus Features has acquired U.S. rights to the Electric Daisy Carnival documentary “Under the Electric Sky (EDC 2013),” which premiered at the Sundance Film Festival earlier this year, TheWrap has learned.

In an innovative partnership, theatrical crowdsourcing company Tugg will inaugurate the film’s playdates starting in May and continue throughout the summer by working with producer Insomniac (one of the top tour promoters of electronic dance music events) to engage the loyal community of EDM fans and give them the first opportunity to request and host screenings in their local markets. Audiences will be able to create movie screening events and use social media to spread the word and invite friends, family and fellow EDM fans to join the experience.

Tugg’s screening events will commence in May, and Focus will complement those screenings with a targeted domestic theatrical release.

The 3D movie was directed by Dan Cutforth and Jane Lipsitz, who also executive produced with Michael Rapino and John Hopmans of LiveNation, which will also be involved in rallying the broader music community. The feel-good film was produced by Insomniac’s CEO Pasquale Rotella and COO Simon Rust Lamb along with Rachel Miller and Kevin Mann of Haven Entertainment.

“Under the Electric Sky” is an immersive 3D documentary that explores the allure of the EDM phenomenon as told through the experiences of six different groups of festivalgoers attending the 2013 Electric Daisy Carnival (EDC) in Las Vegas. Those personal stories are combined with performances by Fatboy Slim, Kaskade, Dillon Francis, Afrojack, Above & Beyond, Armin Van Buren, Avicii and Tiësto, Hardwell and Calvin Harris.

Cutforth and Lipsitz brought the event to life by going behind the scenes to show what it takes to stage one of the biggest parties in the known universe. They chronicle the unique journeys of individual attendees from different walks of life, all of whom share one common desire — to shed their inhibitions and immerse themselves in this judgment-free celebration of life and music.

Renowned artist Kaskade created the musical score to accompany the film, while KCRW music director Jason Bentley acted as the music supervisor for the documentary.

The film was the brainchild of Rotella, who is widely regarded as one of the most influential champions of EDM in the world. It was Rotella, the CEO and founder of Insomniac, who brought the creative team together to make “Under the Electric Sky.”

Launched with auspicious beginnings in 1997, the Electric Daisy Carnival was first held in Los Angeles, much to the delight of its initial crowd of a few thousand electronic music fans. Since then, it has grown into a global phenomenon. Besides drawing the top talents in electronic and dance music today, EDC is known for its full-scale carnival rides, over-the-top displays of pyrotechnics, and interactive art installations, not to mention its international community of committed devotees. In 2013, nearly 350,000 revelers descended upon Las Vegas to experience what is now the world’s largest dance-music festival.

Cutforth and Lipsitz’s previous credits include the hit concert documentaries “Katy Perry: Part of Me” and “Justin Bieber: Never Say Never,” which grossed nearly $100 million at the worldwide box office.

The distribution agreement for rights to the film was negotiated by Focus Features’ executive VP of business affairs Beth Lemberger along with WME Global on behalf of the filmmakers and producers.