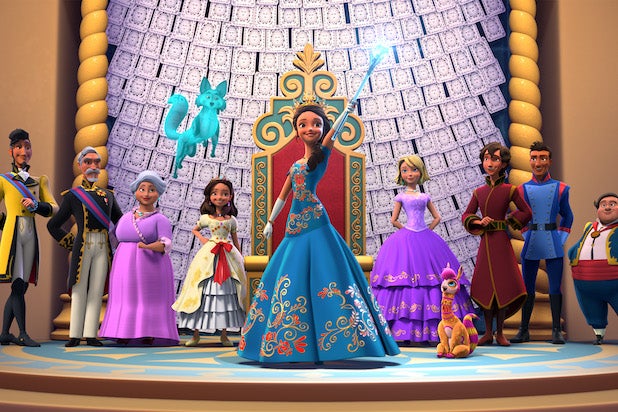 “Elena of Avalor” will conclude with a primetime finale special in which the titular character, who is Disney’s first Latina princess, finally becomes queen. (“Blaze!”)

Disney Junior’s “Elena of Avalor” tells the story of Elena, a brave and adventurous teenager who has been learning what it takes to be a great leader by ruling her enchanted fairytale kingdom as crown princess until she is old enough to be queen. (OK, so she was technically trapped in an amulet for 41 years, but they don’t count that towards her age.)

In the series finale, as plans for Elena’s coronation are underway, Esteban’s team of villains unleash legendary spirit misfits, the Four Shades of Awesome. In order to save her kingdom, her family and her friends, Elena must journey to the Spirit World and back, and face the ultimate test of her courage and character, before becoming queen.

“Elena of Avalor: Coronation Day” will air at 7 p.m. ET/PT on Sunday, Aug. 23 on Disney Junior. Between now and then, new episodes of the series will air each Sunday at 5 p.m. ET/PT.

“It has been a tremendous honor for me to bring Disney’s first Latina princess to the screen,” creator and executive producer Craig Gerber said in a statement. “Everyone involved with ‘Elena of Avalor,’ from the creative team to the unbelievable cast and crew, felt the responsibility to get this right. We created the character of Elena with the hope that she would be a role model, not just for young Latina girls watching, but for all children to be able to see what a true leader looks like. From the beginning, Elena’s story arc has been that she would one day become queen. With the series finale, the creative team has been able to bring Elena’s story to the thrilling conclusion that we always envisioned. I can’t wait for viewers to see the final chapter in Elena’s epic adventure.”

“Elena of Avalor” hails from Disney Television Animation. It debuted in July 2016.