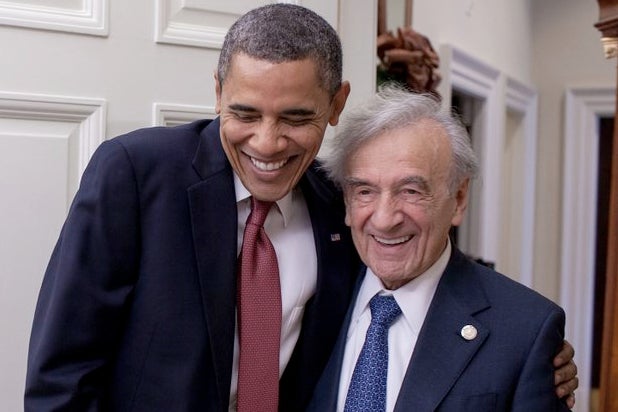 Hollywood and the world’s leaders have come out to pay tribute to Holocaust survivor and Nobel Laureate Elie Wiesel, who died Saturday at the age of 87.

“Elie Wiesel was a great moral voice of our time and a conscience for our world,” said President Barack Obama on Twitter. “He was also a dear friend. We will miss him deeply.”

The sentiments were echoed by other high-profile individuals from the world of politics, literature and entertainment.

Actor-director George Clooney offered his own testimonial in a statement: “Unless you’re 88 years old most of us have not lived in a world without Elie Wiesel. We had a champion who carried our pain, our guilt and our responsibility on his shoulders for generations. Now he’s gone. It’s hard to fathom. So I guess it’s up to us now. To fight for the disenfranchised. To speak truth to power and to never forget how cruel man can be to man. In memory of Elie it’s the least we can do. Rest in peace my friend. You brought us this far. We’ll take it from here.”

“Thank you Elie Wiesel,” said Tony-winning “Hamilton” composer-star Lin-Manuel Miranda. “The world is profoundly better because you were here.”

Israeli Prime Minister Benjamin Netanyahu said Saturday that Wiesel “gave expression to the victory of the human spirit over cruelty and evil, through his extraordinary personality and his fascinating books.”

The Romanian-born Wiesel wrote dozens of books, including the 1955 best-seller “Night” chronicling his experience as a teenage boy at Nazi concentration camps in Auschwitz and Buchenwald during World War II.

In both his written words and in charismatic speeches he delivered worldwide, Wiesel has acted as a moral conscience for decades about the scope and horror of the German efforts to eradicate Jews like himself, and became an outspoken voice on human rights.

Below is a sampling of reactions to the passing of Elie Wiesel:

Elie Wiesel was a great moral voice of our time and a conscience for our world. He was also a dear friend. We will miss him deeply.

Thank you Elie Wiesel. The world is profoundly better because you were here.

"In the face of evil, we must summon our capacity for good." —@POTUS on Elie Wiesel: https://t.co/d83QNEqroz pic.twitter.com/TqvWcm7zQi

I pray that the beacon that was Elie Wiesel will long guide us away from the shoals of hatred and racism.

We will never forget, Elie Wiesel. That, you can rest knowing. You were a light in the night & the world mourns your passing. #neverforget

Elie Wiesel was an extraordinary man – a soldier for peace. He inspired me and supported me as a mentor and a friend. #RIPElieWiesel

Read "Night" at 11. A year later, in a hotel lobby, I shook his hand. What I remember is having no words to say. https://t.co/czyaTcSvSr

If you haven't read Night, please do. RIP Elie Wiesel.

Elie Wiesel: a hero for our times. A clear, consistent, and enduring moral voice.

Elie Wiesel is proof that you don't need formal authority to change the world, all you need is the moral authority. pic.twitter.com/bzFRjzxYDW

RIP Elie Wiesel. thanks for your matchless service as a witness, and inspiration, for the world

I am deeply saddened to know Elie Wiesel has passed away. He was one of humanity's brightest lights. He'll be profoundly missed.

Elie Wiesel on worrying "the world is not learning anything."
Interview: https://t.co/VLPB4QKYaa pic.twitter.com/zpvfEzPsZG

Great way to pay tribute to Elie Wiesel? Read either Night or my personal favorite Twilight. Such a loss.

The opposite of love is not hate, it's indifference. – Elie Wiesel —https://t.co/n2TpQHy1kK via @TheWorldPost