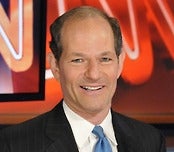 A little over two years ago, Eliot Spitzer stood beside his wife, Silda, at a teary press conference where he resigned as governor of New York.

On Wednesday, Spitzer stood beside Kathleen Parker, his co-host in a CNN talk show that will debut this fall and air five nights a week. Happier times.

Spitzer's journey from disgraced politician to newly minted CNN host began with a job blogging for Slate in December 2008, nine months after he left the governor's mansion. In 2010, the man once dubbed "Love Gov" by the New York tabloids began a mini-media blitz. Spitzer regularly appeared on MSNBC. He also gave interviews for a documentary, a website called Big Think and a group of journalism school students.

Spitzer maintains that he never had his eye on a media gig. Hours after he got the CNN job, he told TheWrap, "I'm not sure I have targeted anything, I've chosen to participate when asked or when invited to speak places that I thought would be interesting venues to speak to some of the issues."

Spitzer said the CNN show was "not something I had been seeking."

He might not have been courted by the network, but we're sure the man who once reportedly described himself as a "f–cking steamroller" is pleased to be back in a prominent political position.