The Academy announced on Thursday that Banks will host the Scientific and Technical Awards ceremony, the night when the Academy of Motion Picture Arts and Sciences salutes the science of filmmaking.  The Sci-Tech Awards, as they’re popularly known, will take place on Saturday, February 20 at the Beverly Wilshire hotel in Beverly Hills. 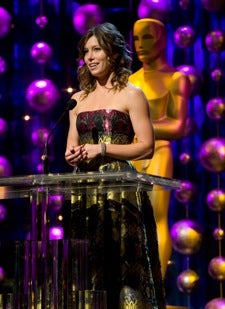 The Sci-Tech Awards are normally hosted by an actress who’s appeared in at least one prominent special-effects laden movie, and who’s game to read a TelePrompTer laden with phrases like "the Imocap on-set performance capture system" and "point-based rendering for indirect illumination and ambient occlusion," both of which are achievements being honored this year. (Jessica Biel, right, did the honors last year; photo by Todd Wawrychuk/AMPAS.)

Usually, the host then appears on the Oscar show to recap the Sci-Tech honors.

Banks has appeared in all three "Spider-Man" movies, as well as "The 40-Year-Old Virgin," "Seabiscuit" and "Catch Me If You Can."

Beverly Hills, CA (February 11, 2010) — Actress Elizabeth Banks will host the Academy of Motion Picture Arts and Sciences’ Scientific and Technical Awards on Saturday, February 20, at the Beverly Wilshire in Beverly Hills. Banks will present 15 awards to 45 individual recipients during the evening.

Banks’s upcoming roles will be in the feature film “The Next Three Days” directed by Paul Haggis, opposite Russell Crowe, and in “The Details,” with Tobey Maguire and Laura Linney. Banks’s credits include roles in “Definitely, Maybe,” “W.,” “The 40 Year-Old Virgin,” “Seabiscuit,” “Catch Me If You Can” and the “Spider-Man” trilogy of films.

Academy Awards® for outstanding film achievements of 2009 will be presented on Sunday, March 7, 2010, at the Kodak Theatre at Hollywood & Highland Center®, and televised live by the ABC Television Network beginning at 5 p.m. PT/ 8 p.m. ET. The Oscar presentation also will be televised live in more than 200 countries worldwide.