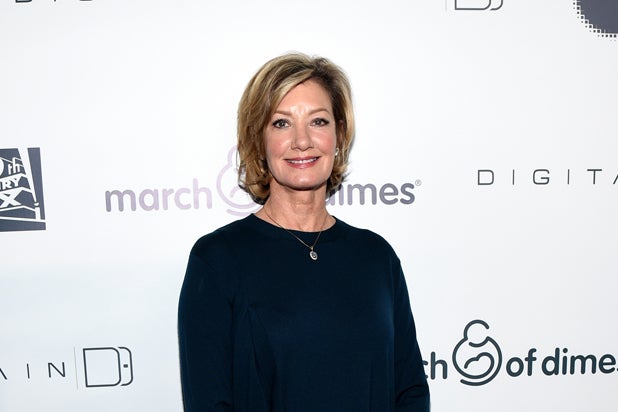 Elizabeth Gabler is headed to Sony Pictures in an overall production deal that includes HarpersCollins Publishers and her entire team from Fox 2000.

Gabler most recently oversaw production at Fox 2000 as president of production. She was left with a decision on what to do next, however, once Disney decided to shutter the Fox 2000 film division following its acquisition of Fox’s film and TV assets.

“I have been fortunate to work with Brian, Elizabeth and her talented team in the past,” Sony Motion Picture Group Chairman Tom Rothman said in a statement. “They are the gold standard at their respective jobs and I am overjoyed that we will all be working together in this very forward-looking partnership. Content creators need to find new and aggressive ways to move up in, and enhance, the value chain for authors, publishers, filmmakers, and studios alike, and we believe this alliance will offer many such new opportunities. Plus, let’s face it, no one makes more hits than Elizabeth. Trust me, I know.”

As part of the deal, Sony and HarperCollins Publishers launched an entirely new venture with Gabler and her Fox 2000 team to source literary material and produce film content across all platforms.

“For the past two decades our division has thrived by building a film slate based principally on adaptations of literary properties, both fiction and non-fiction,” Gabler said. “Our close collaborations with authors and their material gives us a tremendous advantage because the development process begins with a terrific story and great characters and even more so after publication, with the added bonus of audience pre-awareness.

“Additionally, when a film is in production and up through release, we collaborate closely with our authors, their representatives, and most importantly, the publishers, to maximize book sales in conjunction with the film,” she continued. “We have always felt that HarperCollins is part of our family and it is now an honor and a privilege to create a true partnership with Brian Murray and his amazing global team. The only person I know who could have made this a reality with Brian is my mentor, friend, and inspiration, Tom Rothman, and my team and I are deeply grateful for the opportunity to become part of the powerhouse that is Sony Pictures Entertainment.”

When Disney took over at Fox, the studio said it planned to close Fox 2000 after Joe Wright’s “The Woman in the Window,” which stars Amy Adams and Gary Oldman and is set to hit theaters in October. Disney said it would complete the films already in production, but it was unclear whether Gabler and her team would still have a place in the new company.

Her yet-to-be-named venture will be located on the Sony Pictures lot in Culver City and will commence operations later this summer.

The multi-year partnership will pursue, develop, and make theatrical films and high-level content derived from all sources including, but not limited to, the HarperCollins catalog. SPE will have a first-look at projects, but the deal with SPE contemplates that Gabler and her team may also make content for any streaming or television platforms. SPE and HarperCollins are co-funding the new partnership. Gabler’s team from Fox 2000 includes Erin Siminoff, Marisa Paiva, Nikki Ramey, and Molly Saffron.

“No one in Hollywood has done a better job of bringing books to film than Elizabeth and her team, including many films based on HarperCollins titles,” HarperCollins Publishers CEO Brian Murray said in a statement. “As a company, we invest more than $300 million in new works by authors each year. Now, through this partnership with Elizabeth and [Sony Pictures Entertainment], we will expand our investment in writers to include film, TV, and streaming opportunities, creating new possibilities for authors to have their books adapted and developed by the best literary team in history with the full support and capabilities of SPE.

“This partnership is consistent with News Corp’s broader focus to monetize premium content on a global scale across platforms,” Murray continued. “I am incredibly excited to blaze a new trail with Elizabeth and Tom Rothman at this time of tremendous opportunity and change in the business of storytelling.”

Kevin Marks at Gang, Tyre, Ramer, Brown worked on this deal on behalf of Gabler, who had served as president of Fox 2000 since 1999, where she and her team achieved commercial and critical success with literary adaptations and other commercially successful films based on original material and other mediums.

Among their many adaptations are Ang Lee’s Oscar-winning film “Life of Pi” and the Oscar-nominated “Hidden Figures,” based on the HarperCollins non-fiction best seller, as well as other films based on HarperCollins titles including “Marley & Me,” “Love, Simon,” and most recently “The Hate U Give,” based on the critically acclaimed, phenomenally bestselling debut novel by Angie Thomas.

In addition, Fox 2000 films include the adaptation of John Green’s blockbuster “The Fault in Our Stars” and “The Devil Wears Prada.” The future venture will also capitalize on what was Fox 2000’s mission to create enduring adult-based filmmaker-driven films such as “Man on Fire,” “Unfaithful” and “The Family Stone,” Sony said.