Elizabeth Taylor has allowed the publication of her love letters from Richard Burton, with one exception, in a book excerpted in July's Vanity Fair.

In their upcoming book "Furious Love: Elizabeth Taylor, Richard Burton and the Marriage of the Century," Vanity Fair contributing editor Sam Kashner and co-author Nancy Schoenberger trace the arc of Burton and Taylor's turbulent romance, through 20 years as the two jilted their spouses for each other, then divorced, then remarried and divorced again. 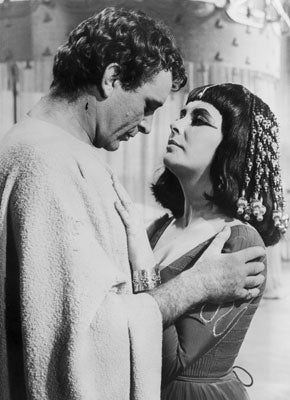 Taylor is keeping one letter private, according to Vanity Fair. Burton wrote it to Taylor in 1984, a few days before he died of a brain hemorrhage in Switzerland; she did not receive it until after she had returned from his memorial service.

In that letter, Burton said he wanted to come home to her, according to Taylor, who read the letter she keeps in her bedside drawer to Kashner and Schoenberger.

The magazine publishes chunks of Burton's prose, including his take on Taylor's talent: "You are probably the best actress in the world, which, combined with your extraordinary beauty, makes you unique."

He also told Taylor how he felt about acting: "I have never quite got over the fact that I thought and I'm afraid I still do think, that 'acting' for a man -- a really proper man -- is sissified and faintly ridiculous. I will do this film with [Carlo] Ponti and [Sophia] Loren out of sheer cupidity -- desire for money. I will unques­tionably do many more. But my heart, unlike yours, is not in it."

Vanity Fair will be on newsstands on June 8; "Furious Love" is due out June 15.