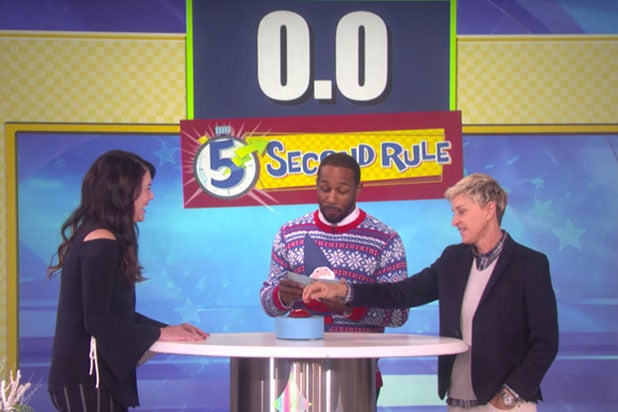 Ellen DeGeneres has a whole new reason to dance: The “Finding Dory” star has scored an hourlong NBC game show based on her popular talk show games.

“Ellen’s Game of Games” landed six primetime episodes from the No. 1 (among adults 18-49) broadcaster. Here’s NBC’s official description of the adaptation from “The Ellen DeGeneres Show”: Contestants, pulled right from the audience, will have to maneuver massive obstacles, answer questions under immense pressure and face a gigantic plunge into the unknown. While every episode will feature DeGeneres’ one-of-kind comedy, personality and a unique roster of games, they’ll all end the same way — with DeGeneres giving someone a chance at a huge cash prize.

“I’m so excited to be hosting a huge primetime game show for NBC,” DeGeneres said. “We’re pulling out all the stops — gigantic sets, hilarious games. It’s going to be like a combination of ‘American Ninja Warrior,’ ‘RuPaul’s Drag Race’ and a water park. OK, it’s nothing like that, but you should still watch.”

“Ellen’s impact as a daytime icon is unprecedented and we can’t wait to see her bring that amazing spirit to ‘Game of Games,'” Paul Telegdy, president, Alternative and Reality Group, NBC Entertainment, added. “She is among the very best at engaging with her devoted audience and we are all in for a treat when her antics hit primetime.”

“Since establishing Warner Alternative Television over three years ago, some of our greatest successes have come from working with Ellen and her incredibly talented team,” said Mike Darnell, president, Warner Bros. Unscripted and Alternative Television. “But the dream has always been to get Ellen herself to say yes to hosting a primetime show. Now that she finally has, I am more than ecstatic. We’ve married a great concept to the best host in the business. Home run!”