NBC has put Ellen DeGeneres fans on its nice list, setting a holiday event series starring the comedian, “Ellen’s Greatest Night of Giveaways,” for this December.

“Over three one-hour specials, DeGeneres, along with her celebrity friends, will deliver incredible gifts to unsuspecting people who’ve topped her nice list,” per the broadcast network. “Everyday deserving people and in-studio audience members will never see it coming as DeGeneres presents mind-blowing offerings and shocking prizes, with A-list stars in tow. It’s the greatest holiday giveaway ever and it’s coming to knock your stockings off.”

“I was so excited when NBC told me that they had truckloads of cash and expensive gifts that they wanted to give me for the holidays,” DeGeneres said. “You can imagine my surprise when they said ‘No Ellen, we want you to give away truckloads of cash and expensive gifts for the holidays.’ Long story short, I can’t wait to host ‘Ellen’s Greatest Night of Giveaways’ on NBC.”

“There is no one better to spread holiday cheer than Ellen, whose 12 Days of Giveaways on her daytime show are the hottest ticket in town and the most thrilling time of the year for viewers,” Meredith Ahr, president of NBC Entertainment’s Alternative and Reality Group, added. “We can’t wait to bring that excitement into primetime this holiday season with supersized giveaways, jaw-dropping surprises and heart-warming stories.”

“We are thrilled to further expand Ellen’s brand and our successful partnership with NBC. There’s no better team to be in business with, and this will guarantee a very bright holiday season for all,” Mike Darnell, president of Warner Bros. Unscripted & Alternative Television, said.

Also Read: Broadcast Bloodbath: All of the TV Shows Canceled This Week (Photos)

See the poster for “Ellen’s Greatest Night of Giveaways” below. 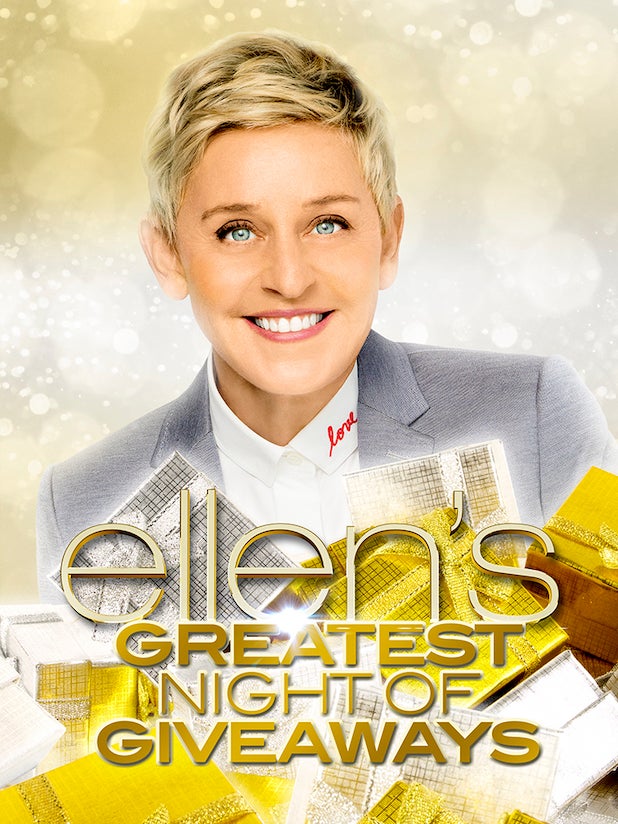