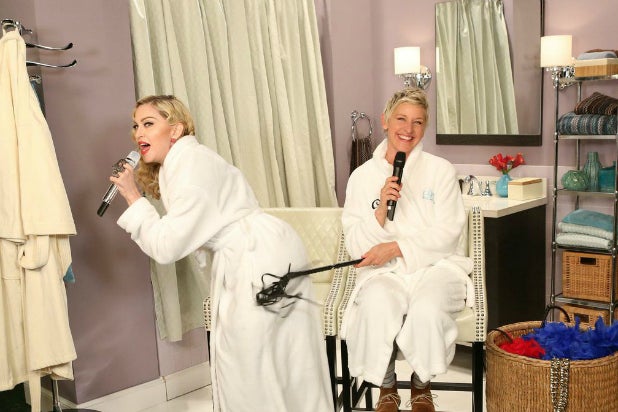 “Ellen” is going in the toilet — but in the name of entertainment.

Ellen DeGeneres brought back the Bathroom Concert Series to conclude her daytime talk show’s “Madonna Week.” Alongside the Material Girl and in front of a vanity and tub/shower combo, the duo belted out Madonna‘s classic hit “Dress You Up.”

The two started out in really comfortable bathrobes, before the props starting coming out and Madonna eventually stripped, as she is wont to do.

We hate to break the fourth wall here, but there were only two actual walls in this particular bathroom — it was simply a set for filming purposes, of course.

Madonna‘s new album “Rebel Heart” debuted at No. 2 this week, beaten out by Fox’s “Empire” soundtrack. In claiming the top spot, the hip-hop soap opera became the first TV show soundtrack to bow at No. 1 on the Billboard 200 since “Glee” in 2010.